A Climber’s Guide to Westeros: How to Climb at Dragonstone, the Iron Islands, & More IRL

What doesn’t it have? The dragons, the wars, the drama. Not to mention the spectacular scenery.

But what you may not know is that many of the scenes in Game of Thrones are filmed in an unassuming part of the world with some epic climbing areas:

Northern Ireland — the home of Finn MacCool, the Giant’s Causeway and now Game of Thrones itself.

One spot in particular, Fair Head, pops up many times in the show, and it might just be one of the best-kept-secret climbing areas in the world.

Fair Head: The Setting of Dragonstone, The Iron Islands, and More

If you watched Season 7 of Game of Thrones, you saw Jon, Tyrion, and Melisandre having brooding scenes upon the edge of a large cliff in Dragonstone. In episode 6 we finally got a look at the cliff they were standing on and it looked massive.

But surely it was all just CGI? 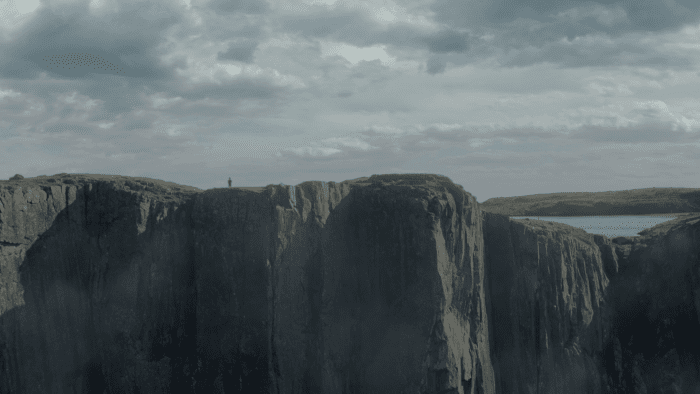 Tyrion standing at the edge of the massive cliff in Dragonstone

In fact, the views you’ll get from this area are even greater than what the show has to offer. Check out this awesome video by Islander Visual that lets you finally go and poke your head over the edge.

Behold Fair Head! 3 miles of towering cliff faces reaching over 100 m in height. Home to the best climbing in Ireland and possibly the whole of the British Isles.

It’s a world-class trad climbing venue with over 400 routes to be experienced along its length. Many of these routes are multi-pitches with 30-40 m of climbing each section.

It’s basically the Giant’s Causeway’s big brother. Being right beside the Causeway, there is still a columnar nature to the rock in some parts, but everything is scaled up massively. The trad climbing varies from cracks and corners with endless protection to sparsely protected, knuckle-clenching face climbs. 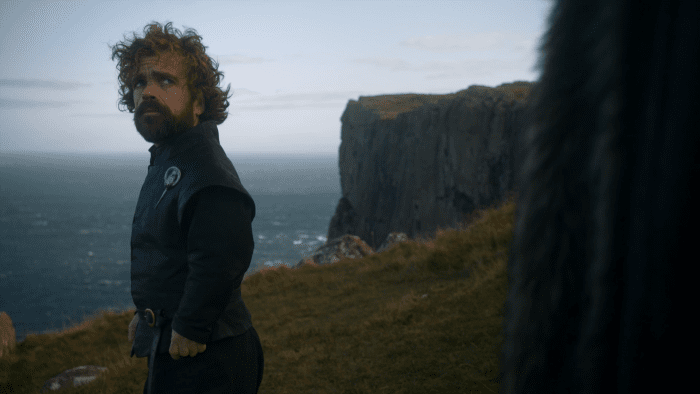 The Complete Scream, E8 6b, pictured in the background behind Tyrion

One such sparsely protected face climb is pictured here in the distance behind Tyrion. It is known as The Complete Scream and has an English Traditional grade of E8 6b. In other words, it’s pretty damn scary.

The gear is in fact so sparse on this face that when Alex Honnold, the man himself, walked up to it he decided not the bother with protection at all and instead free soloed it.

Here’s a video recapping the feat that occurred at the Fair Head Meet of 2016.

But these pondering scenes at Dragonstone aren’t the only time Fair Head has been used in Game of Thrones. The Murlough Bay (eastern) side of the cliff has been featured multiple times as a dramatic background for the Iron Islands and other settings. 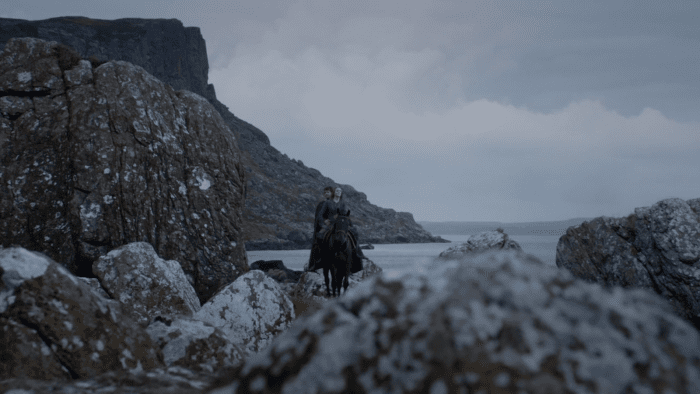 This side of Fair Head is also home to some world-class trad climbing but is actually more popular for its bouldering. As you can see from the view, the 100 m of cliff gives way to another 100 m of boulder field before the ocean. The boulders here have a unique, edgy, and geometric style and can be as big as houses.

Be warned though that the combination of tall lines and landings (that would not be called ‘landings’ anywhere else in the world) has led the locals to use the term ‘adventure bouldering’ as opposed to your more traditional nomenclature. 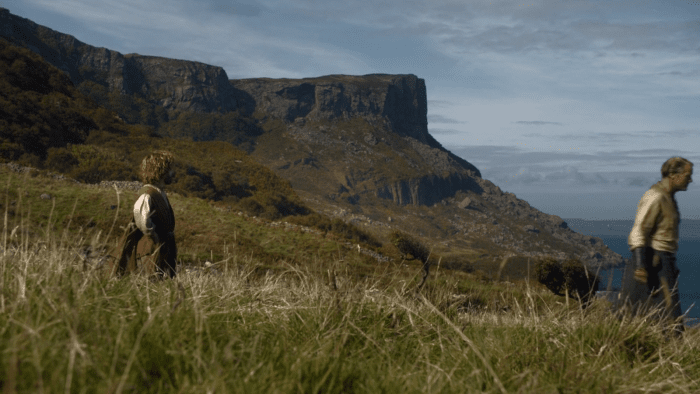 In the background of this shot, you can probably pick out a tall, proud block standing at an angle towards the top end of the boulder field. This glorious piece of rock has a problem on it called Spindle (8A/V11) which is a strong contender for one of the best lines in the world.

Oh, and Melisandre Gave Birth to Her Shadow Assassin Baby in the Potato Cave

For the sake of completeness, there is one more Irish climbing area featured in Game of Thrones we should mention. A cave made from crazy conglomerate rock, the locals know it as The Potato Cave in Cushendun.

But you’ll know it as the cave where Melisandre, the Red Woman, gave birth to that freaky shadow baby assassin thing. 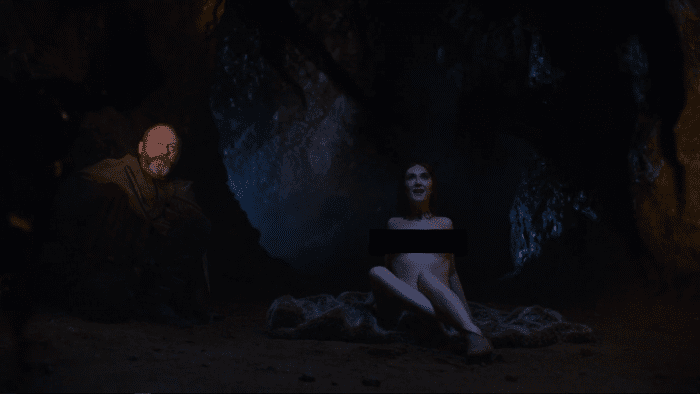 It might not be an area worth traveling around the world for, but it does have its quirks. Most notably the massive quartzite ‘potatoes’ splattered throughout the rock. Have a look at this video of what the climbing looks like.

To say Fair Head is epic is an understatement. When you’re there — no matter where you are among the cliff faces — you get the feeling that this place must have once been home to giants. It gives a sense of reasoning behind all the lore of the Giant’s Causeway just down the road, and the thought of Fair Head being a home for dragons seems fitting.

If you’re keen to visit Fair Head and check out it’s climbing, there’s a climbing festival around the first weekend of June each year known as the Fair Head Meet.

It’s a great opportunity to get acquainted with the crag and you’ll also get to experience the craic of the Irish! But come prepared — the area has both a dedicated bouldering and route guide which will be almost essential if you want to navigate your way around this land of dragons and giants. 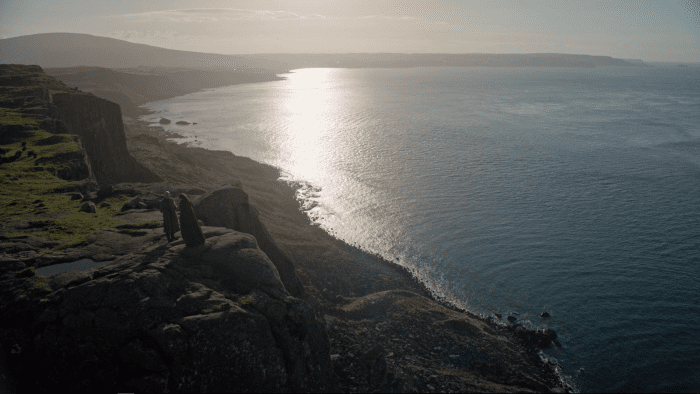 Varys and Melisandre at Dragonstone

Although I’ve always wondered how they manage to catch the breaks in the weather to film these scenes!

About the Author: Danaan Markey

Raised in the mountains of Ireland, Danaan is a man on a mission to combine his two favourite things — adventure and bouldering. Danaan lived in Sheffield, UK (one of the largest climbing hubs in Europe) for 4 years where he worked as a coach alongside many of the GB Climbing Team coaches. This means he knows a thing or two about training. He's now off on worldwide wander and you can follow his adventures on his Instagram.