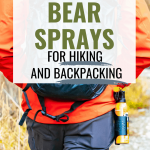 When it comes to enjoying the great outdoors, probably the biggest misconception revolves around wildlife encounters. Wilderness survival “experts” with short eBooks and would-be-YouTubers alike disproportionately focus on the threat of bears in the wilderness.

Fortunately, I’m here to tell you that bears are not the biggest threat in the backcountry.

That’s not to say that bears don’t pose a real and tangible threat to hikers in certain situations, because they definitely do!

However, with the proper knowledge, preparations, and equipment, we can all but eliminate dangerous bear encounters in the backcountry. Today we’re going to take a look at the top three options for bear spray — the most effective solution to a bear encounter when the bear scat hits the fan.

When it comes to stopping a bear attack that’s already in progress, bear spray has been proven more effective than any other method.

The high concentrations of capsaicin, an active component of chili peppers which is also used in pepper spray.

This is impressive compared to other bear sprays that will only shoot 12-32 feet. When you’ve got a bear charging you, every extra inch of spray distance is critical to give you time and space to make your escape.

The biggest drawback of this particular bear spray is the lack of a belt holster. The manufacturer does sell a belt holster separately which allows immediate access to the spray and can even allow the spray to be used while still in the holster. However, I think they should’ve included that with the base product, but that’s just me.

Most Frequently Seen on the Trail: Counter Assault Bear Deterrent

From time spent on the trail and guiding trips for various companies, I will say that Counter Assault seems to be the most common brand of spray on the trail today.

Honestly, I think it’s because this bear spray is easy to find in most outdoor stores and outfitters. Good marketing on their part!

That’s not to say that Counter Assault Bear Deterrent isn’t effective, though, because it does contain the exact same concentration of the active ingredient capsaicin as other bear sprays. It also reaches up to 32 feet and can spray for a continuous 9.2 seconds in the 290g canister. That’s quite a bit longer spray duration than other competitors so there’s definitely a strong reason to consider this a winning criterion.

Fortunately, Counter Assault has included a nylon holster with their bear spray which gives them another leg up on the Frontiersman’s lack of included holster. From personal experience, however, I can tell you that the holster is flimsy and will deteriorate over extended periods of use. I’ve seen these holsters take a lot of abuse in the field, though, so you should be fine.

While I haven’t seen this brand in the field, there are plenty of great reviews and testimonials of it around the web.

A nine-ounce canister of this spray is capable of covering 15-20 feet of distance and boasts a four-year shelf life.

Since bear spray isn’t particularly cheap to begin with, it’s always nice to be able to rely on these to last a long time between uses. Nothing will ruin your day faster than trying to use your bear spray just to find out that it doesn’t work because you left it sitting in the closet for years. Yikes!

With a can of Guard Alaska Bear Repellent, you’ll be able to spray a fog of bear-deterring capsaicin for up to nine seconds. This is an impressive spray duration compared to other brands and the second best of our lineup by total spray duration.

By ratio, it’s actually the longest-spraying bear spray on this list when compared to the overall size of the can in ounces.

A can of Guard Alaska Bear Repellent does come with its own holster and belt clip but I highly recommend modifying the belt clip so that there’s no chance of it coming off and getting lost when you need it most!

How to Choose the Best Bear Spray for Your Needs

There are several considerations that will heavily impact your final choice of bear spray. Just because one is more popular than another does not necessarily make it the best bear spray for your needs. Let’s take a look at exactly what to consider when purchasing a bear spray.

Bear spray can’t do its job if it’s packed away inside your backpack when the bear comes a-chargin’. One of the biggest mistakes hikers make with bear spray is packing it somewhere that can’t easily be accessed.

Some of the most popular access points include attaching bear spray to your:

If the bear spray you choose does not already come with a great option for attaching to one of these locations, you may want to consider making one yourself if you have sewing skills. Remember that when wearing a backpack, chest harnesses and belt holsters are usually not an option as the pack will get in the way of these.

Not all bear deterrents are made equal when it comes to spray distance.

Out of our list of bear sprays, here are the choices in order of maximum distance:

If you’re worried about getting your bear spray to release the largest and furthest reaching cloud of capsaicin possible, you’ll want to go with the Frontiersman Bear Spray.

It’s important to know and use the safety features on your bear spray. While bear spray is effective at stopping bears, it’s also effective at disabling humans. Don’t screw up and spray yourself with the bear spray when you’re trying to deter the bear instead. It won’t end well.

All of the bear spray products we’ve reviewed feature safety caps which prevent accidental discharge. Both the Frontiersman and Counter Assault brands feature glow-in-the-dark protective safety caps so that you can easily find and release the safety if you need to repel a bear at night.

A Final Note About Safety

It’s important to note that bear spray is a last-ditch effort to deter a bear attack, and that effectively deterring bear attacks starts with proper education about backcountry travel practices.

Carrying bear spray does not make you a bear-warrior. Encountering a bear is dangerous, with or without bear spray. For this reason, I recommend always doing your best to avoid bear encounters with intelligent travel practices.

Taking a course on backcountry travel from a reputable organization such as NOLS or Outward Bound will give you the education and understanding you’ll need to safely travel into the backcountry and avoid dangerous bear encounters.

Taking a wilderness medicine course, such as Wilderness First Aid or Wilderness First Responder, is another crucial component of being a competent and safe backcountry traveler and should be part of your overall education and mitigation strategy.

About the Author: Casey Fiedler