We took 12 of the best non-locking carabiners on the market out for a round-robin competition. Different carabiners serve different needs, but at the end of the day two strong favorites emerged: the Wild Country Helium and the Petzl Spirit.

It’s easy to take the humble carabiner for granted. Many climbers spend hours researching shoes and belay devices but snag the first ‘biner they see on the shelf.

On one hand, this is understandable. Carabiners tend to be fairly cheap (although when you’re buying a full rack, they add up), and most carabiners share the same basic functionality as a connector. All the carabiners in our test will theoretically work in most scenarios.

But picking the right carabiner makes a surprisingly large difference in the quality of your climbing life. We learned firsthand which of the top carabiners perform best in the field — read on for details. 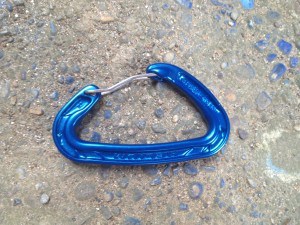 The Helium has practically defined the wire-gate genre for the past decade.

It’s still the gold standard. This is the carabiner that all the other wire gates try to live up to.

The Helium offers the best of all worlds: a lightweight and supremely usable carabiner with a wire gate and a keylock nose. A flared “hood” over the notch in the nose means that life with the Helium is snag-free.

It has the largest gate clearance of any carabiner in our test, and the thoughtful full-size shape is easy to handle in every application we could think of.

Competitors have rushed to copy and improve the Helium’s formula, but Wild Country still executes best.

The sole downside to the Helium is the price of entry. Wild Country charges a premium for the privilege of carrying Heliums — it’s the most expensive ‘biner in our test by a significant margin. 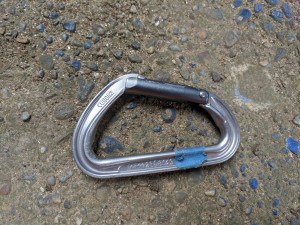 Another classic, the Petzl Spirit has long been a favorite tool in the sport climber’s arsenal.

Its clean, ergonomic design makes for easy clipping and cleaning in both straight- and bent-gate form.

With one at each end, the Spirit Express quickdraw is the BMW of the sport-climbing world — pricey, but so nice to drive.

The Spirit’s talents aren’t limited to sport climbing, however. I personally use straight-gate Spirits to rack nuts, because I find the smooth shape and keylock nose make for easy handling on-route.

Some belay devices have features that require clipping a carabiner in as a handle, and the Spirit excels thanks to its clean shape and narrow nose.

To top it off, the Spirit is the lightest of all the solid-gate carabiners in our test. It’s not as slim as the wire-gate options, but all-around usability makes it the champ wherever handling is a priority. 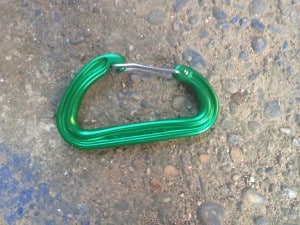 Too often, weight savings come at the cost of usability (*cough* Metolius *cough*).

The DMM Phantom is the lightweight carabiner that best approached the handling and user-friendliness of full-size ‘biners.

The DMM lacks one major feature of its main competition (the Black Diamond Oz and Petzl Ange), which is a keylock nose.

DMM does make a keylock version, the Chimera. But even in traditional form the DMM squeaked out a victory.

Despite having a smaller gate clearance, the Phantom was noticeably easier to handle than either the Oz or the Ange. It was hard for testers to specify why, but most pointed to the grip-friendly shape and the straight spine.

For whatever reason, this carabiner was hardly distinguishable from full-size ‘biners in practice. At a weight of 28 grams, that’s an impressive feat, one that the other ultralights failed to match.

Even with a traditional nose, the Phantom is the lightweight carabiner we recommed. 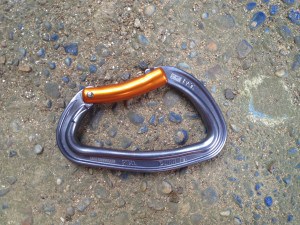 The Djinn is like your first car: you buy it because you know it will take a beating.

Designed for durability, the Djinn packs extra grams of aluminum where it counts.

Wide and uniform contact surfaces around the basket make for excellent durability and predictable handling.

At the end of testing the Djinn showed hardly any wear, and we don’t doubt that it will perform for years to come. The Djinn is affordable for a solid-gate carabiner.

The penalty for durability is weight: the Djinn is the second-heaviest ‘biner in our test. It would be an excellent beater carabiner for projects or sport climbing, but tradsters should seek out lighter options. 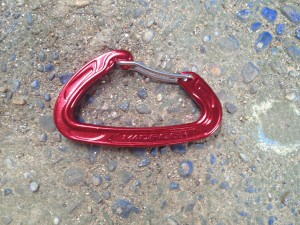 The Mad Rock Ultralight is not the most sophisticated design, nor the most usable, nor the lightest.

What it is is cheap and functional. As of this writing it’s tied for cheapest carabiner in our test with the similar Trango Phase.

Despite being a gram heavier, testers felt that the Mad Rock was a hair more usable, so it wins our value award.

“Ultralight” might be an overstatement, but 31 grams is light enough. It’s in the middle usability-wise, but we never found a reason to dislike it.

Our lone caveat is the squared-off rope-bearing surface — although we don’t have the equipment to confirm, we suspect that the shape increases rope drag slightly in quickdraws.

We wouldn’t be thrilled if this were the only carabiner we could use, but we also wouldn’t mind racking cams on Ultralights. If you’re looking to cut your budget, the Mad Rock isn’t a bad place to start.

Reviews of the 7 Other Carabiners We Tested 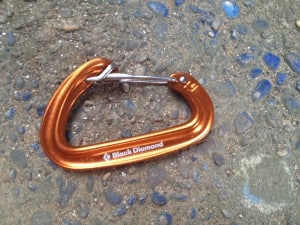 The Oz has all the ingredients of a winner: smooth design, a clever hooded keylock nose, and a lean 28-gram weight.

Truth be told, I expected this carabiner to walk away with an award.

But while it was a solid performer, the Oz was not a favorite. Its weakness is usability: the rounded spine felt slippery and unpredictable, and the gate’s tension is inconsistent.

The Oz still performs its duties, but it didn’t inspire confidence. When we’re high off the ground we prefer predictability, which gave the DMM Phantom the edge. 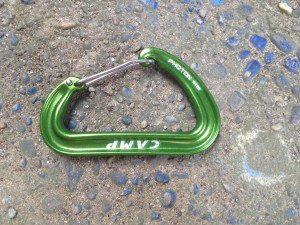 After the Wild Country Helium, the Camp Photon has the largest gate clearance of any wire gate in our test.

Testers with large hands appreciated the Photon’s chunky design, and the wide surfaces make for smooth handling. At 30 grams, the Photon is impressively lightweight for its size.

But the Photon was betrayed by its gate. By the end of testing, the wire gate was starting to lose its springiness slightly.

This eventually happens with most wire gates, but the Photon showed wear before competitors. It’s possible that we got a dud, but it’s hard to know.

For the price, the Photon isn’t too dear to replace, but we’d rather have a wire-gate we know is built to last. That’s a shame, because the Photon was otherwise a strong competitor. 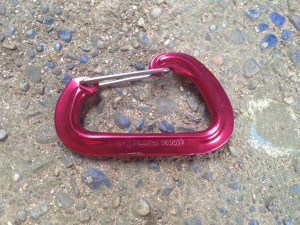 The Neutrino is a frequent sight at any trad crag. It’s Black Diamond’s mainstream model, the one most often paired with Camalots on racks.

As far as performance goes, the Neutrino is as average as it gets.

It’s not heavy, but it’s not light. Durability seems solid, and handling is adequate but not easy.

As is the case with so many Black Diamond products, the motto seems to be: offend not, excel not.

This is the vanilla ice cream of wire-gates — cheap and dependable, but it’s not too hard to do better. 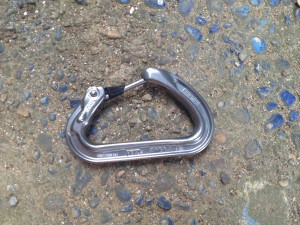 Another innovative design, the Petzl Ange swaps the traditional wire-gate loop for a single rod of metal.

Petzl claims it’s a more durable design, and while they might be right, it’s also not as easy to use.

The Ange S’s gate clearance is impressive for a 28-gram carabiner, but we still found ourselves fumbling when clipping and unclipping.

The high-tension gate requires a steady hand, and the rubber at the base of the gate improves but doesn’t alleviate the problem.

The Ange’s smooth design was otherwise pleasant, but it failed to win over testers. As of this writing it’s the second-most expensive ‘biner in our test and doesn’t offer exceptional value.

Petzl makes a larger version (Ange L) that may handle better, but it’s heavier and even more expensive. 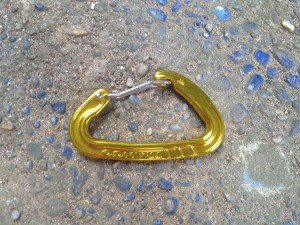 The Phase tips the scales at a relatively light 30 grams, but the funky spine was a turn-off for testers.

“It feels harder to clip,” went one complaint, and by the end of the test the Phase was not among anyone’s favorites.

It’s a budget-friendly choice, but in our opinion the Mad Rock Ultralight Wire Gate is a slightly better buy. 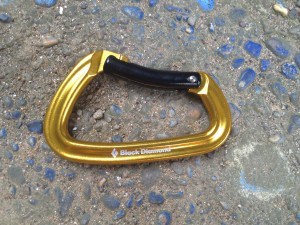 The Black Diamond Positron is another veteran of sport crags, but it didn’t impress in testing.

The wide, solid beams make for the heaviest weight of any carabiner in our test, but the gate still feels flimsy and inconsistent.

Compared to the confidence-inspiring feel of Petzl’s solid gates, the Positron was much less pleasant to use.

With no significant price advantage and a small weight penalty, we can’t think of many reasons to recommend it. 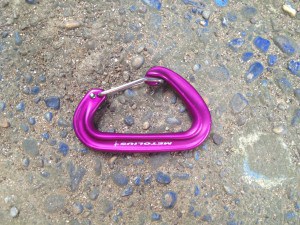 The Mini II is the lightest carabiner in our test, but it was also among the least user-friendly.

The gate clearance is a puny 17.5 mm, and the Mini feels like a toy in large hands. For daily use, we prefer a more usable ‘biner.

In the Mini’s favor, it performs adequately after a small learning curve.

For hardcore alpinists, there’s an argument to be made for the Mini II as an ultralight racking ‘biner or gear-side connector.

We can’t imagine that long-term durability is all that good, but the Mini II is blessedly cheap. A few ounces of weight savings might be worth the trouble for some.

Here are the best carabiners for rock climbing:

How to Choose the Best Non-Locking Carabiner for Your Needs

Non-locking carabiners play many roles, but they’re most commonly used to rack gear and construct quickdraws.

One of the most important features is shape — although D-shaped and oval carabiners have their uses, for this test we confined ourselves to asymmetrical-D carabiners.

Traditionally, wire-gate and solid-gate carabiners have distinct pros and cons.

Solid-gate ‘biners have snag-free keylock noses, strong durability, and easy clipping. Wire-gate versions are lighter, don’t freeze shut as easily, and suffer less gate flutter (the opening of a gate during a fall, which can theoretically lead to dangerous scenarios).

Nowadays, many carabiners offer more of the complete package. Solid-gate ‘biners are getting lighter, while many wire gates have their own version of keylock noses.

Still, the patterns generally hold. Solid-gate carabiners are most pleasant to clip, which is why they show up at sport crags where weight is less critical. Wire gates are still the lightest, which makes them the choice for trad climbers and alpinists.

Straight-gate carabiners offer predictable grip and handling, while bent-gate ‘biners have a larger gate clearance and are slightly easier to clip.

While some wire-gate ‘biners do have both bent and straight forms, the difference is most pronounced on solid-gate carabiners.

Weight savings can add up — a rack might include 40 carabiners or more, so adding 3 grams per carabiner means over a quarter of a pound in total.

To begin, we put all 12 carabiners through a bevy of basic tests for common tasks like clipping a rope or racking gear.

To see if the test results matched our intuitions, we took them out in the field and used them to build draws, clip bolts, and rack protection.

At the end of the day, ‘biners were scored on their usability then durability, with a final modifier for weight.

How easy is the carabiner to handle? How well does it perform in various roles? How often do I find myself mishandling or snagging? This category was weighted most heavily.

How much of a weight penalty do I pay by selecting this carabiner?