We bought 10 of the best climbing slings and runners around and did our best to destroy them. The good news is this: differences between slings are small, and all these products did their job. When it came time to declare a winner, however, we crowned the Sterling Dyneema Sling as our favorite all-around performer.

This roundup turned out to be one of the closest gear tests we’ve done: at the end of scoring, the eight middle competitors were separated by only five points.

This is good news for consumers. All these slings are functional, effective, and generally excellent to use.

The differences between them come down to subtle distinctions in weight, durability, and stiffness. Because performance is similar, choosing slings is more about personal needs, habits, and preferences. Read on for more details. 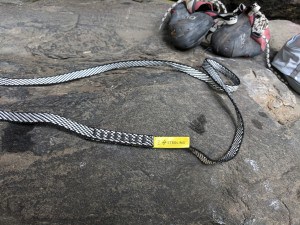 The Sterling Dyneema Sling isn’t the lightest in our test, nor is it the burliest.

It won out based on its ability to thrive in almost all scenarios, along with its excellent handling. It’s a sling that testers universally enjoyed using, and one we found ourselves reaching for on almost every outing.

Sterling makes this sling in 10mm width as well, but the 12mm is a nice compromise between the floss-like ultralight slings and the wider nylon.

If you need to yank on gear or step in a sling for a moment, this sling is noticeably more comfortable than one like the Mammut Contact.

What most impressed testers was the smooth handling. When extending alpine draws, the Sterling Dyneema was always easy and snag-free. It’s among the easier dyneema slings to knot and unknot, and it performed well in abrasion testing.

It’s a few grams heavier than the ultralight dyneema offerings, but light and low-bulk enough that it racks well. For all-around use, it’s everything we could wish for. 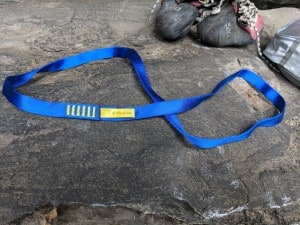 Sterling takes home a second award for its nylon offering, which was our favorite of the pure nylon slings.

Many climbers these days prefer to rack up with only dyneema. In our opinion, nylon slings still have a place in the arsenal of a modern climber.

Anywhere where shock-loading is possible or knots are necessary, there’s a strong argument for nylon. What’s more, nylon is cheaper than dyneema — if you have to bail or leave a sling, nylon will be cheaper to replace. So we set aside an award for our favorite old-school nylon sling.

Sterling’s nylon sling differentiated itself with excellent handling and impressive abrasion resistance, better than either the Metolius or the Black Diamond versions. It remained supple throughout the testing period and feels nearly as new as when we first opened the package.

The Sterling Nylon is a tiny bit more expensive, and although the differences are relatively small, it’s the one we’d have for general use. 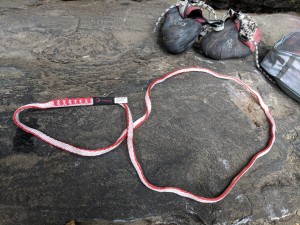 The Mammut Contact isn’t the lightest sling in our test — that honor goes to the Black Diamond Dynex Runner.

But at only 2g heavier, the Contact was testers’ favorite of the ultralight offerings.

Just 8mm wide, the Contact is the skinniest sling we tested. It folds up incredibly small, especially in alpine-draw form.

It’s also surprisingly easy to handle. It performed the best of all dyneema offerings in our knot/unknot test, and the supple feel made it easy to manipulate in the field.

The only knock is a long and stiff bar-tack, which requires a little extra care to avoid snags.

The major drawback of the Contact is durability. In abrasion testing, this sling was one of the first to fuzz up. As skinny as it is, we’d be wary of using this sling in scenarios where it’s likely to see a lot of abuse.

Still, for fast-and-light missions the Contact is hard to beat. For long alpine climbs, a rack of Contact runners would be our weapon of choice. 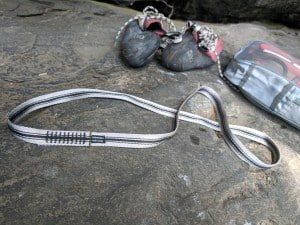 Separated by a single point and sporting a similar price, these two slings are close enough in performance that they both warrant a nod for best value.

Of the two, the Metolius is slightly thicker and heavier. It’s also slightly smoother to handle, although it was trickier to unknot than the Black Diamond. 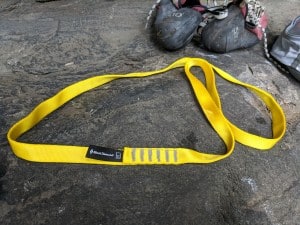 The Black Diamond is lighter and a little less bulky, especially when folded into alpine draws.

It scored lower because during testing it stiffened up a little more than the Metolius or Sterling nylon, which made it slightly less pleasant to handle.

Overall, however, both these slings are exactly what you would expect: reliable, simple, burly nylon.

They’re just more than half the price of the cheapest dyneema slings, and if budget is a concern, they’ll get the job done.

Reviews of the 5 Other Climbing Slings & Runners We Tested 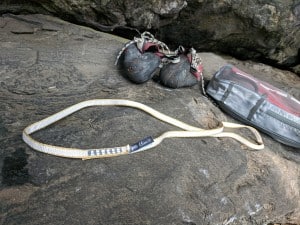 Petzl’s dyneema offering was a top performer, notable for its light weight and superb abrasion resistance.

At just 20g, it’s surprisingly light for its 12mm width. In our abrasion testing, it barely fuzzed at all and performed the best of any dyneema sling.

It was slightly stiff at first, but loosened up nicely after a few uses.

The St’Anneau’s fatal flaw is its price. It’s by far the most expensive sling in our test.

It’s a quality product, but we would be reluctant to spend an extra few bucks per sling, especially when the other dyneema slings perform nearly as well. 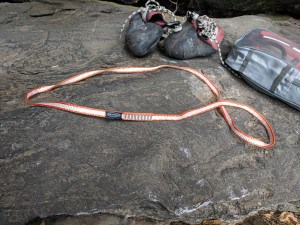 Another respectable performer, the Trango sling scored well in every area except durability.

An 11mm width was easy to handle, and the Low Bulk sling lived up to its name. The feel is flexible and smooth, and the sling was an average performer (for dyneema) in our knot/unknot test.

Like the Mammut Contact, the biggest weakness came in abrasion testing. The Trango sling fuzzed up quickly and more severely than competitors.

It feels burly enough to withstand some abuse, but we’d still be a little careful to keep it away from sharp edges.

Otherwise, the Trango is an excellent dyneema sling, and a few cents cheaper than most of the other dyneema offerings. It’s worth a look, especially when on sale. 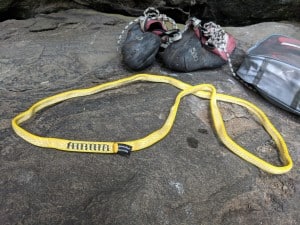 Metolius is the only company in our test to sew slings out of a nylon/dyneema blend.

The result is approximately what you’d expect: a sling with the width of dyneema and the feel of nylon.

It splits the difference in weight as well — heavier than the dyneema slings, but lighter than the nylon.

In general, the material is good. It handles nicely and performed well in our abrasion testing.

The only quirk was an odd tendency to retain wrinkles and folds, which occasionally led to snags or knots. It’s also bulkier than other dyneema slings, especially when formed into alpine draws.

These drawbacks meant that the “Monster” fabric never became a favorite, despite reasonable performance and a slightly cheaper price than skinnier slings. 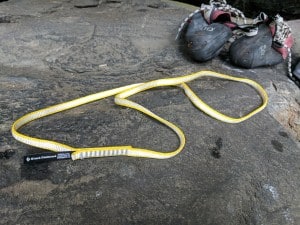 The lightest sling in our test, the BD Dynex is also the second narrowest at 10mm. It is impressively trim, although neither as foldable nor as easy to handle as the Mammut Contact.

This sling finished dead last in our unknotting test, and it was slightly more difficult to manipulate. The inconsistent handling was what dropped the Dynex a few ranks in our scoring.

In the Black Diamond’s favor, it was a strong performer in abrasion testing. We slightly prefer the Mammut and Trango slings, but the Dynex is still a strong choice for alpine draws and lightweight racks. 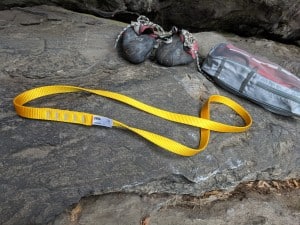 The only true disappointment of the lot, the Petzl Anneau is the burliest sling in our test. It’s noticeably thicker and heavier than the other webbing, with a thick weave and a ridged texture.

In some ways this was reassuring — if anything, the Anneau feels like it’s over-engineered.

For most climbing applications, though, the extra material got in the way.

The Anneau was a pain to knot, and it took up far too much space when racked as an alpine draw. It technically functioned in all scenarios, but it would rarely be our first choice.

It wasn’t even an all-star in abrasion testing — despite the extra thickness, it fuzzed up relatively quickly.

To make matters worse, the Anneau is the same price as the much lighter Metolius Monster Open Sling, and nearly as expensive as some dyneema slings. Unless you like the extra stiffness, we’d recommend sticking to the nylon slings in this width.

Here are the best climbing slings and runners:

How to Choose the Best Climbing Slings for Your Needs

The discussion over nylon vs. dyneema slings is a long one and worth reading up on.

In short, nylon is heavier and stretchier, while dyneema slings are lighter, less absorbent, and more slippery.

Dyneema slings are prized for their light weight and low bulk, and alpine/winter climbers often prefer them for not absorbing water.

On the other hand, dyneema slings are less forgiving when shock-loaded and lose significant strength when knotted. In our testing, dyneema slings were always more difficult to unknot than pure nylon.

In practice, slings of either type almost never fail. Especially where a dynamic component (the climbing rope) is in the system, dyneema slings will perform just fine.

It’s worth making educated decisions about where you might use (or avoid using) dyneema. Any situations in which shock-loading is possible or knots are required will likely call for nylon.

Still, a full rack of dyneema draws might save a half pound over nylon, and it will take up less space on your harness. Know your systems and habits, and make educated choices.

Skinnier slings have obvious advantages in terms of size and weight.

But, thicker webbing is often useful — if you need to do a couple moves of impromptu aid, thick slings will make your life easier.

Your ideal sling size may also depend on how you rack — some climbers prefer to put their slings in alpine draws on the harness, while others throw everything over a shoulder.

Another simple trade-off: dyneema slings are lighter but more expensive. If you’re building a rack on a budget, buy nylon and save your cash for elsewhere. If you have the means, pick the sling(s) that seem best suited to your needs.

I then tied well-dressed knots in each sling, cinched each one down with the same amount of force, and timed how long each took to unknot.

Finally, I took the slings to some local schist, found sharp edges, and did my best to tear them up. At the end of it all, tester impressions were aggregated with test results to score slings in three areas:

How well does the sling fulfill its basic duties? Can I do everything I need to do with the sling?

How easy is the sling to use? How often do I find myself stuck, slipping, or snagging with the sling?

How easy is the sling to abrade?

Preventing Common Climbing Injuries: A Conversation with the Climbing Doctor