We put 8 of the best electrolyte powders to the test on our adventures for over a month. To keep ourselves honest, we then put them through a blind taste test. At the end of it all, the Vitalyte Electrolyte Replacement Powder is our Top Pick.

Skratch Labs Sport Hydration Mix came in a close runner-up. Both had a cool and refreshing flavor with no artificial taste, and left us feeling hydrated and ready to keep adventuring.

If you have a sweet tooth, we recommend Ultima Replenisher Mix. Although it had an artificial sweetener taste, it was by far the sweetest in our test, and was our “guilty pleasure” way to replace lost electrolytes.

Read on for our full reviews and for advice on choosing the right electrolyte powder to fuel your adventures. 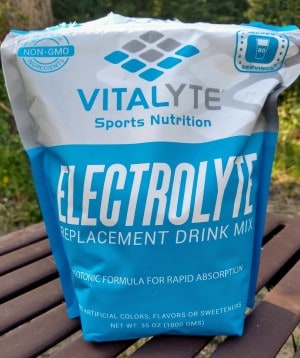 In our blind taste test, Vitalyte Electrolyte Replacement Powder won the day. It got rave reviews for its refreshing flavor and lack of artificial taste.

One tester described it as “very mild, but super tasty and refreshing.” Another said it “tastes like electrolytes, no weird flavors or fake sugar.”

It dissolved very easily, with just a few shakes of a Nalgene, and it never separated out or settled to the bottom of our water bottles.

During our (admittedly subjective) hydration test, Vitalyte felt like it was one of the most hydrating mixes. Maybe it was because its light and unassuming flavor made it so easy to down an entire bottle.

Whatever the reason, we found ourselves reaching for Vitalyte most often, especially when temperatures hit triple digits.

This electrolyte powder does have a very mild flavor and was one of the least sweet in our test. (If you’re looking for something sweet, check out the Ultima Replenisher Mix, reviewed below.) If you’re looking for a refreshing and healthy way to rehydrate after a long day on the trial, though, Vitalyte really hits the spot. 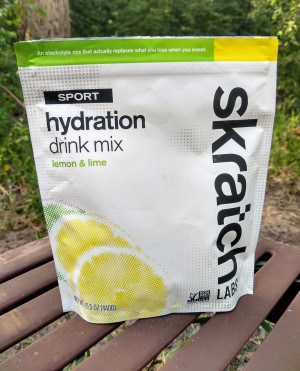 Skratch Labs Hydration Drink Mix was a close runner-up to Vitalyte. It has a similarly refreshing flavor, though it’s noticeably sweeter.

Our taste testers liked the real sugar and the fact that there’s no artificial sweetener or fake taste. One tester said it had a “good balance of sweet and salty flavors.”

This mix has about the same amount of sugars as our Top Pick when you account for the differences in scoop size. We liked that it’s much higher in sodium, making it a better choice if you’ll be doing long days on the trail or sweating it out in extreme heat.

Skratch’s electrolyte mix was a win for our testers, and it’s perfect if you prefer a sweeter and fruitier flavor that’s still refreshing and crisp. 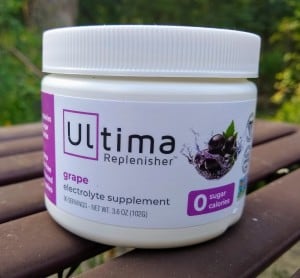 Ultima got mixed reviews, but we all agreed on one thing: it was by far the sweetest in our test.

As one of our taste testers said: “I weirdly really like it, because it reminds me of drinking Kool-Aid.”

It does have a strong fake sugar flavor and aftertaste. We also didn’t think it felt as hydrating as our top two powders, mainly because the aftertaste left us oddly thirsty for some water to wash it down.

The mix also had some issues with consistency. It liked to clump up, and no amount of mixing or shaking could get it to fully dissolve. The powder was quick to settle to the bottom of our water bottles when left sitting for a few minutes.

Our consensus was that the Ultima was much too sweet to be our go-to hydration mix, but would make a nice treat for satisfying a sweet tooth every now and then.

Reviews of the 5 Other Electrolyte Powders We Tested 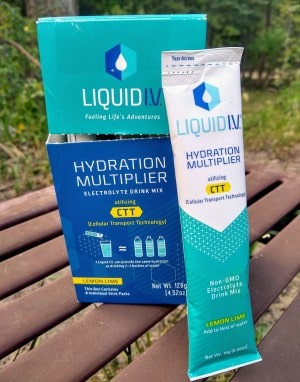 Liquid I.V. Hydration Multiplier is aptly named — we felt that this mix was one of the most refreshing and hydrating in our test.

It also packs a lot of sodium into each packet. That came through in the taste in a good way, with our testers saying it was “sort of sweet and salty, maybe a little more on the salty side,” and that it “has a nice balance of salty, sweet, and sour flavors.”

We also liked that there was no artificial taste with this mix.

Overall, it’s a great-tasting and hydrating option, excellent for anyone who needs to replace a lot of lost sodium during long, active days. 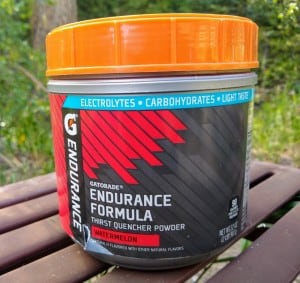 The Gatorade Endurance Formula Powder fell in the middle of the pack in our blind taste test. No one loved it or disliked it.

It wasn’t super sweet, though it had a slightly artificial flavor to it. One tester thought the flavor was reminiscent of Jolly Ranchers.

While not quite as refreshing or hydrating as some of our top powders, it has a mild flavor that went down easy and left us ready to keep adventuring. 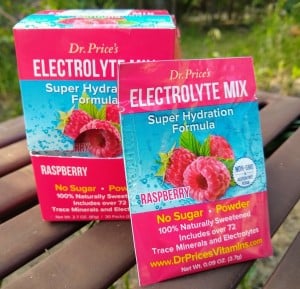 Our tasters thought Dr. Price’s Electrolyte Mix was similar to Liquid I.V. in that it had a great sweet and salty balance with a little bit of sourness to it.

It fell a few points in the rankings for having a somewhat artificial flavor and not as good an overall taste.

Overall, though, we liked this one, and we felt that it did a good job of keeping us hydrated. 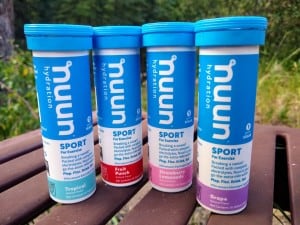 Nuun’s flavors were hit and miss with our tasters. We liked the Tropical flavor the best, with Fruit Punch a close second.

Some of the flavors, particularly the Grape, tasted too mineral and medicinal. While they all had a salty flavor, we agreed it wasn’t quite as well-balanced with the sweet flavors as our top picks. Overall, the taste just didn’t quite hold up to other electrolyte mixes in our test.

Still, we liked the tablet form. They dissolve easily and quickly and have a nice fizziness to them. Nuun also has a good amount of sodium and other nutrients. 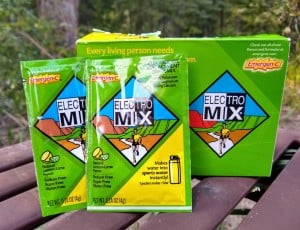 We’re not sure what was going on with Emergen-C Electro Mix, but we know it was our taste testers’ least favorite.

One taster said it “doesn’t really have a sweet, salty or fruity flavor. It’s kind of medicinal and just…gross.” Another said it reminded him of Alka-Seltzer. Its flavor was almost bitter and strongly mineral.

With 0g sodium, it’s also not a great option for endurance, although it is packed with potassium, magnesium, and calcium.

We like mineral water and don’t mind a strong mineral flavor or a little bit of fizz. But the flavors in Emergen-C’s Electro Mix didn’t work for us. It left all of our tasters cringing and reaching for something else to get the taste out of our mouths.

Note: As of this latest update, it appears Emergen-C Electro Mix has been discontinued.

Here are the best electrolyte powders:

How to Choose the Best Electrolyte Powders for Your Needs

Taste and consistency are important considerations, but there are other things to think about when choosing a good electrolyte powder.

When you sweat, you lose on average 1g of sodium per hour, though this can be much higher. Although we often think negatively of sodium, your body needs it to function properly. When it gets too low, you can suffer cramps, fatigue, and in extreme cases, a dangerous condition called hyponatremia.

So replacing lost sodium is important, especially when you’re active for hours at a time or in high heat. For long days on the trail, or days in extreme heat, look for an electrolyte drink with a high sodium content.

You lose a lot of other minerals when you sweat, including potassium, magnesium, and calcium. Low levels can lead to decreased performance, cramps, and sometimes more serious long-term issues. Some electrolyte powders also contain a plethora of other vitamins and minerals.

Sugar gets a bad rap in the diet world, but on an active day, sugar is your friend. It helps give you an energy boost and fuel your trip. Most electrolyte powders are fairly high in sugar. They’re intended to be consumed when you are highly active, and the sugars will get burned off quickly.

Some powers contain artificial sweeteners and have a lower sugar and carbohydrate content. These may be better to drink when you are less active, like when you’re lounging around camp and rehydrating on a hot day.

We made each mix according to the instructions on the packet and had our testers sample the mixes. Each tester gave each mix a rating out of 5 and wrote down any comments that they had.

We used these electrolyte powders to fuel our adventures for over a month. We took them with us on day hikes, trail runs, backpacking trips, and even a few days of paddling around on nearby lakes.

All of these adventures involved spending most of the day outside in the sun and heat, with temperatures reaching triple digits at one point. We made sure to drink at least one Nalgene of an electrolyte mix each day. 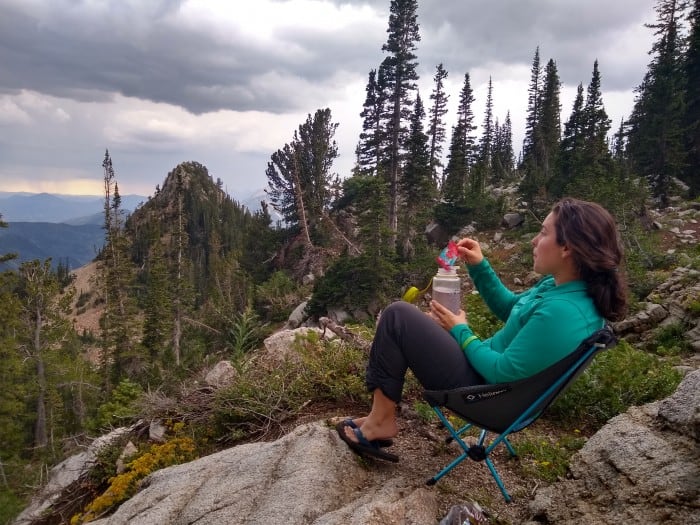