I enlisted eight people for a blind taste test of three of the best powdered hummus mixes. After all the scores were tallied, Casbah Hummus Mix was the clear winner with an average score of four out of five stars for taste.

If you’re looking for the tastiest brand, it’s the one to get. Coincidentally, it’s also the cheapest and easiest to prep. The other two brands we tested call for water and olive oil while Casbah just calls for water.

In addition to scoring each brand on taste, we also asked tasters to write down any comments. Our favorites made it below in our full reviews. 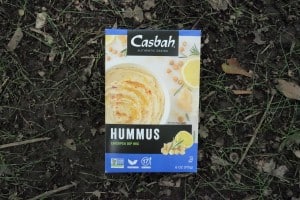 “Tastes like hummus!” wrote one taster who gave the Casbah mix a four out of five.

“Lovely, full-bodied” wrote another who gave it a perfect five out of five.

Tasters noted the pleasant hints of lemon and garlic, and one even commented on its “nice aroma.”

While the clear favorite, a few tasters did note that the flavor wasn’t perfect:

“Good flavor but a little aftertaste at the end.”

“A slight off taste but classic hummus flavor.”

In other words the flavor is good — the best of the mixes we taste tested by a healthy margin — but it isn’t a perfect replacement for the real thing.

But we are talking about instant hummus here. That’s to be expected.

The Casbah mix was also the easiest to prepare. You just add 1 1/2 cups of water to the mix and stir. Unlike the other two brands, it doesn’t call for any olive oil.

However, backpackers who do want to add olive oil for the extra calories can do so easily. If you need some ideas on how to carry olive oil with you while backpacking, here are some good lightweight and leakproof containers and here are some places you can pick up individual packets. 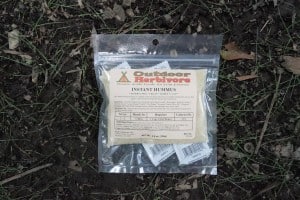 The most common comment made about the Outdoor Herbivore mix was that it didn’t taste that much like hummus:

“Little hummus flavor but somewhat tasty and has a bit of a bite on the finish — overall, unlike hummus.”

One taster wrote that it tastes like falafel. After tasting it myself I’d say that’s not a bad comparison.

One small perk of the Outdoor Herbivore mix is that it comes prepackaged with Marconi olive oil packets. No need to bother with buying and packing your own.

Also, most of the ingredients in this mix are organic, and it has a cleaner label than the Casbah.

Finally, Outdoor Herbivore is a cottage industry gear company. If you buy from them you have the added benefit of supporting a small business. 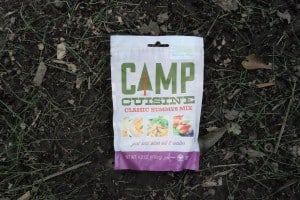 The Harmony Valley mix was our least favorite with an average of two out of five stars for taste.

Most tasters didn’t have much, if anything, good to say about this brand.

Four of the tasters described the mix as “salty” or “too salty.” I tried it myself and had the exact same thought. I wouldn’t want to have to eat a lot of this stuff. The saltiness would be overbearing after a few bites.

The preparation instructions call for 1/4 cup of olive oil — the most by far of all the mixes, and a potentially cumbersome amount to carry on a backpacking trip.

To boot, this mix was the most expensive. It just doesn’t have a lot going for it.

My family was having some friends over for a 4th of July cookout and I was in town, so I used the opportunity to recruit a number of blind taste testers, eight in total.

Before the taste test I prepared each mix according to the instructions on the package. I then labeled each mix with a letter, A-C, so tasters knew mixes only by letter.

I passed around tasting cards with places for tasters to rate each mix on a scale of 1-5 and leave any notes they wanted. They then tasted and scored each mix.

Once everyone was done I took all the scores and averaged them for each brand. These are the scores you saw in the table at the top of the page.

Because each mix was prepared following the instructions on the package, this led to discrepancies in the amounts of water and olive oil.

I was half expecting the brand that called for the most olive oil to have the best score. In fact, the complete opposite happened.

Surprisingly, our Top Pick, Casbah, calls for the least amount of olive oil (none) while our least favorite brand, Harmony Valley, calls for the most (1/4 cup).

This is good news if you don’t like carrying olive oil with you when camping or backpacking. But if you decide to go with Casbah and do like to take olive oil for added flavor and calories by all means go ahead: I tried the Casbah mix with olive oil and it was just as tasty, if not slightly better.

How to Use Hammock Straps: 5 Steps (w/ Videos!)