Every once in a while, our psyches get the better of us. We hit a rut or a plateau, or we bite off more than we can chew and start to burn out. Sometimes we need to do a little climbing for the soul, or just inject some fun back into the training routine.

For those times, what you need are fun climbing games.

Exercising with friends and partners increases motivation and intensity. This is science. When you’re having fun and pushing each other, everyone benefits. These are five good ways to get on the wall, keep training, and have a little fun while you’re at it.

One of those timeless games that can be as friendly or as cruel as you want it to be.

Materials: a stick, a bouldering wall, a dash of sadism

One climber takes the wall at a time, beginning at any jug on a bouldering wall. Those on the ground use the stick to point out the climber’s next hold. The climber must find a way to make the move.

Continue until the climber either can’t make the move or pumps out and falls. Then the next person takes the wall, and the first climber gets to take their revenge.

Several variations are possible here. The most general version points out hand moves, but if you want to get really creative, point out feet too. Or outlaw matching on any hold. Go crazy — the possibilities are endless.

This game is a good way to build dynamic strength and work on deadpoints. It’s one of the best ways to push each other to try hard since climbers on the ground will imagine moves that you never would while on the wall.

The beloved cousin of Stick-On, this is an excellent game for climbers of many abilities.

Materials: A bouldering wall, a group of friends

If you fall before adding a new move, you’re out for the round. Continue until either everyone falls off or the route reaches a natural finish (like the top of the wall), and then begin another round. Feet are traditionally open, but can be added into the moves as a variation.

Hard mode: after adding a move, each climber has to downclimb the route as well. 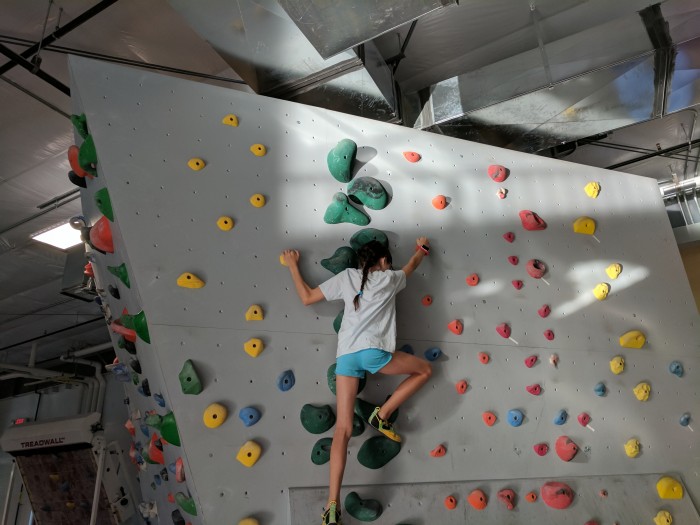 Not only is this game an excellent way to push each other, but it often results in new and challenging custom-made boulder problems. You’ll be surprised what moves people come up with when given a little freedom. If you come up with one you especially like, keep it as part of your circuit.

This game tends to favor the longer-limbed (or those rare climbers with hops), but it’s still a lot of fun.

Climb the route one at a time. Each person who climbs the route eliminates a hold, which may no longer be used for either hands or feet. If you fall, you’re out for the round. Continue until there’s only one climber left standing.

This one is a good way to build dynamic technique. Many climbing gyms favor setting with a plethora of footholds, so this game helps you to start thinking in terms of limited options — something that happens frequently outside.

The same as regular twister, except that the mat is now vertical and shaped like a climbing wall. One person calls out colors and limbs, and everyone has to find a hold nearby and make it work. The last climber standing wins. 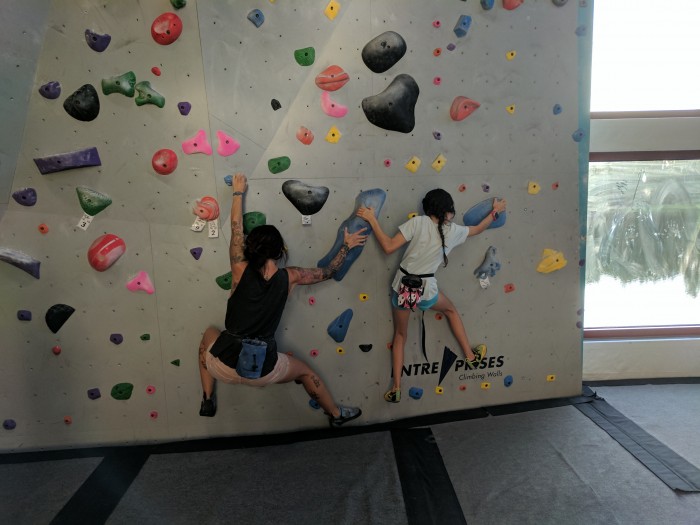 This game works best on a wall with many different-colored routes set next to each other. If the colors don’t line up exactly, that’s okay, it’s easy to sub pink for red, etc. This game can help build endurance, core strength, and balance.

I was recently informed that there’s an Android app for this called Bouldering Twister Spinner. The app features a regular old Twister spinner, but you can customize the colors or mess with the algorithm to make sure there aren’t repetitive streaks. (For iOS, TwistHelper is a good replacement for the traditional spinner but isn’t climbing-focused.)

Also inexplicably present in the Android app is a mode to display the commands in Dutch, as well as a “Cat Mode” that announces paw placements instead of hands. If anyone finds out where all the Dutch cats are bouldering, please contact me.

Just some good old-fashioned racing, to get the competitive juices and lactic acid flowing.

Materials: A healthy number of routes at various grades

There are two ways to play this one. The first: by score. Set a time limit and devise some type of scoring measurement (keep track of grades, add up points, or assign your own point values). Start the clock and start climbing — whoever racks up the most points during the time is the winner.

Alternatively, go time-trial mode and pick out one or a number of routes. Start the clock, and see who can climb them all the fastest.

Both versions are excellent ways to build power-endurance and stamina. They’re also way more fun than four-by-fours. Both work well on bouldering walls, but can be expanded to full routes for the truly masochistic.

Getting accustomed to climbing quickly is useful even for non speed-climbers. Especially on long sport routes, being able to move quickly through pumpy sections can make or break an attempt. Racking up mileage is also one of the best ways to build general fitness and technique.

Special thanks to Salt Pump Climbing Co. in Scarborough, Maine for letting us take photos inside their facilities.