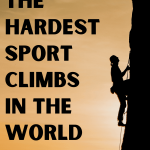 The Hardest Sport Climbs in the World

Last updated: Sep 25, 2019. If you notice any omissions, broken links, or other errors, leave a comment below letting us know.

But the ranks are beginning to grow. 82 different climbers have now claimed at least one 5.15a ascent. Stefano Ghisolfi became the fourth climber in history to climb 5.15c (after Ondra, Sharma, and Megos). All these achievements come on the heels of historic ascents from Margo Hayes, Anak Verhoeven, and Angy Eiter in 2017. Hayes has now sent three 5.15a routes.

To help keep track of it all, this article includes a running list of the hardest climbing routes in existence. To keep things simple, I cut the grade off at 5.15a (9a+) and above.

» MORE: The Hardest Boulder Problems in the World

This title was previously shared by Change, La Dura Dura, and Vasil Vasil — all of which are graded 5.15c (9b+). With his 2017 ascent of Silence, Ondra opened a new grade. Silence has yet to be repeated, but Ondra isn’t generally one to give soft grades.

Only three other climbers have climbed 5.15c, which suggests that it may be a while before anyone manages to catch up to Ondra. The closest competitor may turn out to be Alex Megos, who marked a personal best in 2018 by sending Sharma project Perfecto Mundo.

» MORE: The Hardest Trad Climbs in the World

The Best Sport Climber in the World

The numbers here don’t lie — Adam Ondra is far and away the best sport climber in the world. He has well more than twice the ascents and FAs of the next most prolific hardman (Chris Sharma, of course). He is the lone ascensionist on three of the world’s five hardest climbs, and many of his ascents took shockingly little time. In February 2018, Ondra made history by claiming the world’s first 5.15a flash on Saint Léger’s Super Crackinette.

There is one major factor to commend Sharma, and it’s how far he was ahead of his time. A full 80% of Sharma’s 5.15 climbs were first ascents. He is rightfully renowned for putting up some of the most groundbreaking and excellent climbs of our generation — climbs like Biographie/Realization, Pachamama, and Jumbo Love.

That’s not even to mention his mastery of that tricky medium, deep water soloing: Es Pontas and Alasha remain in a class of their own.

Still, it’s possible that one day we’ll be speaking about Change the way we now talk about Biographie/Realization. Adam Ondra is currently so far ahead of the curve that no one can actually confirm how classic his new climbs are.

Margo Hayes, Anak Verhoeven, and Angy Eiter also deserve huge shoutouts here. Hayes went on a tear in 2017 and completed her third 5.15a in March 2019 on Papichulo. Verhoeven made history as the first woman to make an FA of a 5.15 with Sweet Neuf, and Angy Eiter made it again when she became the first woman to send a 5.15b. Limits are being pushed all over the place, and it’s exciting to imagine what’s yet to come.

It took a while for climbers to really break into the 5.15s. There were a couple flares in the late 90s and early 2000s (including some truly revolutionary ascents), but there wasn’t a consistent number of 5.15 ascents until the late aughts.

That’s actually a relatively consistent grade progression — if things continue as they have, we can expect to wait until the early 2020s before seeing a 5.16a (9c+).

A few things stand out from the data. One is that grades tend to get pushed by a very select few. It takes a while for other ascensionists to catch up. At the moment, it’s pretty much just Adam Ondra. It took around a decade after Open Air for 5.15a ascents to become more common, and frequent 5.15b ascents didn’t start popping up until the 2010s. To date, we’ve still seen only six ascents of a 5.15c, and three were by Ondra.

On the other hand, at a level just below the tip-top, the sport seems to be accelerating. An unprecedented number of climbers ticked 5.15s in the past few years, many of them young and still learning.

Climbing itself is growing, so it makes sense for the number of top ascensionists to grow as well. Training methods, accessibility, and equipment are all improving. In the future it seems likely that we’ll see more high-level ascents from an increasingly diverse group of climbers.

All the same, the fact that 5.15c/d ascents have remained so elusive for all except four climbers is a testament to how difficult it is to push through the plateaus. Not only does it take exceptional athletes with exceptional drive, but it takes projects at just the right level and often in just the right style.

This is part of what makes iconic ascents — from Es Pontas to Silence — seem so revolutionary. Almost all top climbers want to be pushing the boundaries, but grade-wise, only a handful ever do. It’s really, really hard to climb consistently at that level (I’m still halfway convinced that Ondra is an alien). Technology and growth will surely change the sport, but it seems likely that limits will still be broken inch by laborious inch, over long periods of time, by an extremely elite few.

My final note would be that it’s hard to predict when ascents and grades will happen. It might take another decade for someone to repeat Silence or climb another 5.15d, or it might happen in the next few years. The rise of 5.15 ascents means that this is an exciting time for climbing, and personally I’m excited to see what the next generation of wunderkinds have in store.

Plus, if his track record is any indication, Ondra will be putting up a crazy new project by next week.

Where in the World Are the Hardest Sport Climbs?

Most of the remaining climbs are in the USA and Canada. Just a handful are not located in Europe and North America.

That’s both a testament to the insular nature of climbing and a bright look at the future. Imagine all the difficult routes that could be put up around the world — as the sport continues to expand, it finds most of the globe unexplored.