The Petzl GriGri 2 is a device so ubiquitous that it scarcely needs introduction. If you’ve climbed anywhere (including the gym), odds are good that you’ve seen one in use. Some swanky gyms prefer them so much that they keep one on every top-rope setup.

We wanted to see if the GriGri 2 was the best belay device on the market, so we put it up against five other top devices in our belay device shootout.

The results back the legacy — the GriGri 2 remains the most capable, versatile, and reassuring belay device on the market.

That’s not to say it doesn’t have flaws, and the competition is getting closer. But for now, the GriGri 2 remains the device we reach for the most, on everything from days at the crag to big walls. It deserves its award as our Top Pick for belay devices.

If you’d like to read more about how the Petzl GriGri 2 compared to the other devices we tested, check out our article on the best belay devices. Or keep reading for our full review.

This is the first reason to buy a GriGri 2. As much as we try to control the risks in climbing, we can’t control them all. Devices that provide extra safeguards can save lives. If something happens to a belayer, an ATC becomes next to useless. A GriGri will still hold a fall.

Let’s be clear here — the GriGri is not a hands-free device. It is even less an excuse for shoddy belay technique.

The GriGri can still be misused and can still drop climbers, even in the hands of experienced belayers. Make sure you learn how to use one properly.

But it does provide an extra layer of safety, and that’s a welcome addition. Because of the assisted braking, catching falls with a GriGri also requires less energy than most tube-style devices.

Not only does that leave less room for user error, it also means that at the end of an epic day you can worry less about your shaky hands. 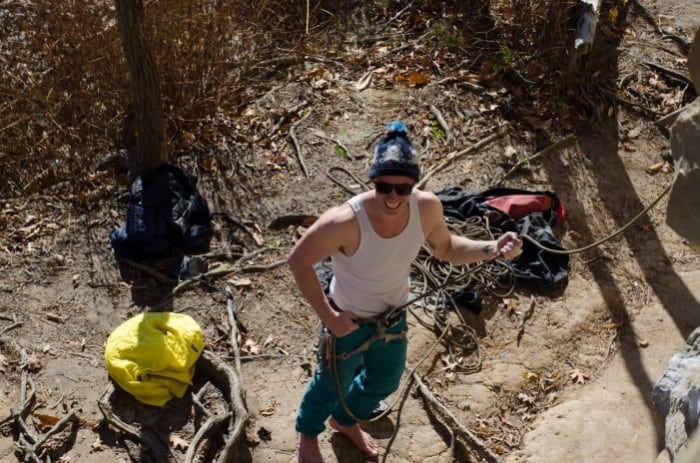 Assisted braking is a blessing on lead belays, but it turns out to be useful in all manner of situations. The GriGri 2 is just as effective belaying from above, and it’s a snap to set up.

One of the best ways to clean a wandering aid pitch uses a jumar and a GriGri. If you fix a rope to rap down a possible new line, you’ll want a GriGri. Need to go hands-free for a second? The GriGri 2 has you covered (and it’s easy to tie a backup knot for insurance).

Plus, safety benefits aside, the GriGri’s assisted braking adds all kinds of convenience to belaying.

When your climber is hanging their way through the crux for the billionth time dialing their beta, the GriGri gives your arms a break from maintaining consistent tension. When they hang at a bolt to visualize their sequence, you can tie a backup knot and have a sip of water. And when they inevitably need to batman back up after a fall, the GriGri makes it easy to take slack and provide counterweight.

All these virtues mean that the GriGri 2 is the device of choice for sport cragging, hard trad climbs, and big walls alike. That’s impressive.

What’s almost as impressive is that the GriGri 2 manages to make its functionality blend into the background.

At this point, many belay devices on the market claim to match (or exceed) the GriGri 2’s safety and capability. Some of them do (including the GriGri 2’s newer and pricier sibling, the GriGri +), but none can match the GriGri 2’s combination of versatility and usability.

It feeds slack smoothly and catches falls effortlessly. The design is clean and the ergonomics are dialed. There’s still a learning curve, but once the GriGri 2 is a part of your arsenal, it becomes an intuitive and easy companion.

This virtue is what separates the GriGri 2 from the GriGri +. The Plus has even more safety features than the Two, adding an anti-panic lowering feature, improved rope compatibility, and a dedicated top-rope mode.

But the new design and features take away from the intuitive functionality of essential belay features, which is why we still prefer the GriGri 2 in most applications.

(For more on the GriGri +, you can check out our full review.) 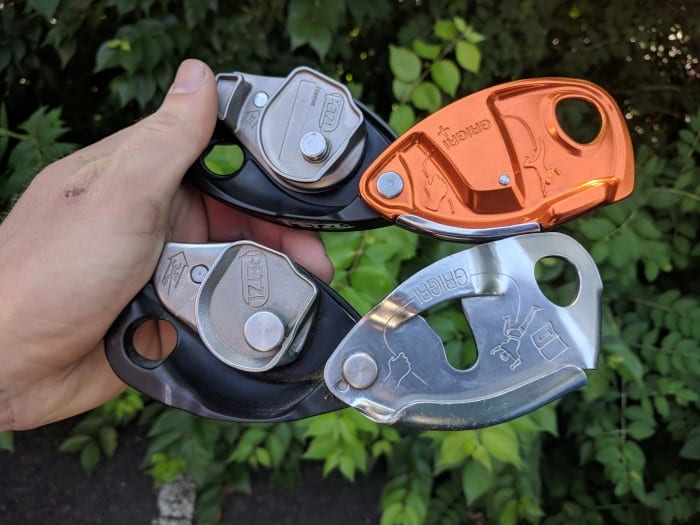 A side-by-side with the GriGri + (top), which has a blunt nub on the faceplate in place of the GriGri 2’s curved tab

Perhaps the biggest reason not to buy a GriGri is its inability to handle more than one strand of rope at a time.

Double rope rappels are out (although you can simul-rap with a partner, if that’s your style). Belaying with two ropes (frequent on trad and ice climbs) is impossible, as is belaying two simultaneous followers. As a result, the GriGri will never completely replace the ATC.

Many multi-pitch climbers stick to an ATC-Guide or Petzl Reverso simply to avoid carrying more than one device. Though it lacks assisted braking, the ATC-Guide is a multi-pitch favorite for good reason.

This weakness also opens the door for devices like the Edelrid Mega Jul or Mammut Smart Alpine, which boast both assisted braking and double-rope capability. Though we like the Mega Jul, it has its flaws, and can’t match the GriGri 2’s overall usability.

It’s worth mentioning that the GriGri 2’s rope compatibility is the narrowest of the lot. For most climbers, this will never be an issue — 8.9 mm is plenty skinny, even for lightweight sport ropes.

The GriGri + adds only 0.4 mm of range, though Petzl says the Plus is slightly easier to handle on ropes below 9.4 mm.

The GriGri 2’s range is really only a problem for the masochists climbing ice, but many of them need tube-style devices for double or half ropes anyway.

All that said, the GriGri 2’s tradeoffs are often worth it.

It’s easy to throw an extra ATC on your climbing harness for rappels, and some teams even use combination systems where the first climber rappels with a GriGri and the second with an ATC.

The trouble may be worthwhile — the GriGri 2’s virtues are valuable on long adventurous routes, where hazards may be more present than usual.

The second knock against the GriGri 2 is weight. At 170 g it’s not quite as beefy as the GriGri +, but it’s still nearly twice the weight of an ATC-Guide (or thrice that of a Mega Jul).

Again, in most cases this is a small price to pay. But the extra weight is noticeable, especially if you still have to carry an ATC for rappels. Light-is-right alpinists may shy away, though many are happy to make the compromise.

The final reason to avoid the GriGri 2 is the price. It’s at the cheaper end of active assisted braking devices, but it’s much more than you’ll pay for a tube-style device.

Given the versatility of devices like the ATC-Guide and Edelrid Mega Jul, we don’t blame some climbers for keeping it simple (the ATC-Guide took home our award for Best Value).

If you can afford it, though, we still think the GriGri 2 is well worth the cash.

In the case of the GriGri 2, it might actually be more efficient to think of venues where this device isn’t a good option.

For mileage at the gym, a beater device like the ATC-XP will work fine for less money. For epic fast-and-light trad missions, subbing in an ATC-Guide or Mega Jul could make more sense. Some ice climbers sometimes find that frozen ropes are less finicky in ATCs than GriGris.

Pretty much everywhere else we can think of, the GriGri 2 is excellent. 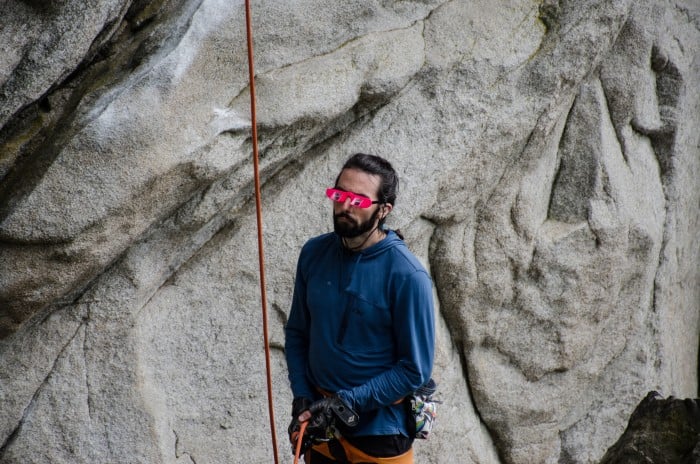 For long belays, the GriGri 2 is a blessing (as are belay glasses)

The GriGri 2 isn’t cheap, but it’s still a decent value. Other active assisted braking devices (devices with a moving cam, like the Camp Matik) tend to be at least as pricy.

For most users, a GriGri 2 will last a few years with no problems. And because of its popularity, it is almost always on sale at one outlet or another.

Still, an ATC-Guide is significantly cheaper. While we consider the safety and functionality of the GriGri 2 to be well worth the price, many climbers get by just fine with the cheaper option.

How the Petzl GriGri 2 Performed in Our Testing 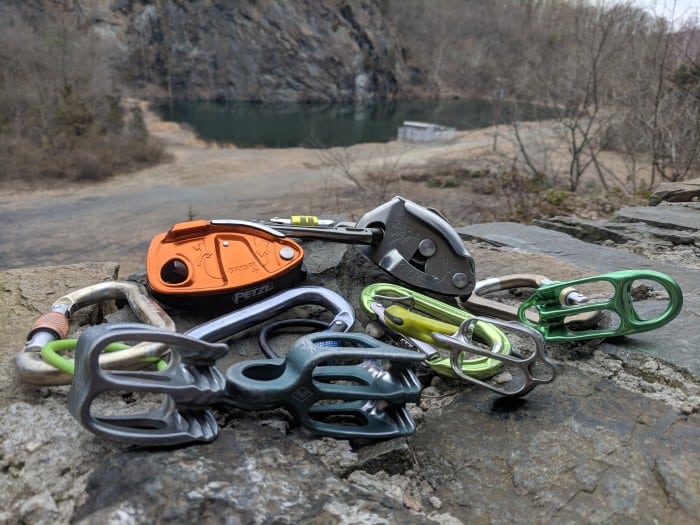 The 6 belay devices we tested in our shootout

The GriGri 2 scored well in this category, exceeded only by the feature-rich GriGri +. All the essential functions of belaying are backed by assisted braking, which is a considerable safety benefit.

It’s still possible to misuse the GriGri 2, but with good habits and proper use, we think accidents are less likely than when using ATCs.

Another top score for the GriGri 2, this is a category where it shines. It lost a few points for the lack of double-strand rappel ability, but gets credit for a extra applications like big-wall systems. The GriGri 2 is comfortable in a remarkable number of venues — it’s just about always in our climbing pack.

This is the category where the GriGri 2 separated itself from competitors like the Mega Jul and GriGri +.

While the GriGri 2 has a slightly steeper learning curve than the Plus, the Two is the device we’d rather use once mastered. And while the Mega Jul comes close to a complete package, it’s clumsy in applications like belaying from above.

No other assisted-braking belay device that we’ve found functions as smoothly as a GriGri 2.

The widespread popularity if the GriGri 2 is a testament to its enduring design. The wonderful part is that it plays a role for so many different types of climber.

The GriGri + made the competition fiercer than ever, but in our eyes the GriGri 2 is still the device to have for most climbers. It’s our favorite belay device, and we bet it will be yours, too.