Just so you know, the company that manufactures this item provided it to 99Boulders for review purposes. 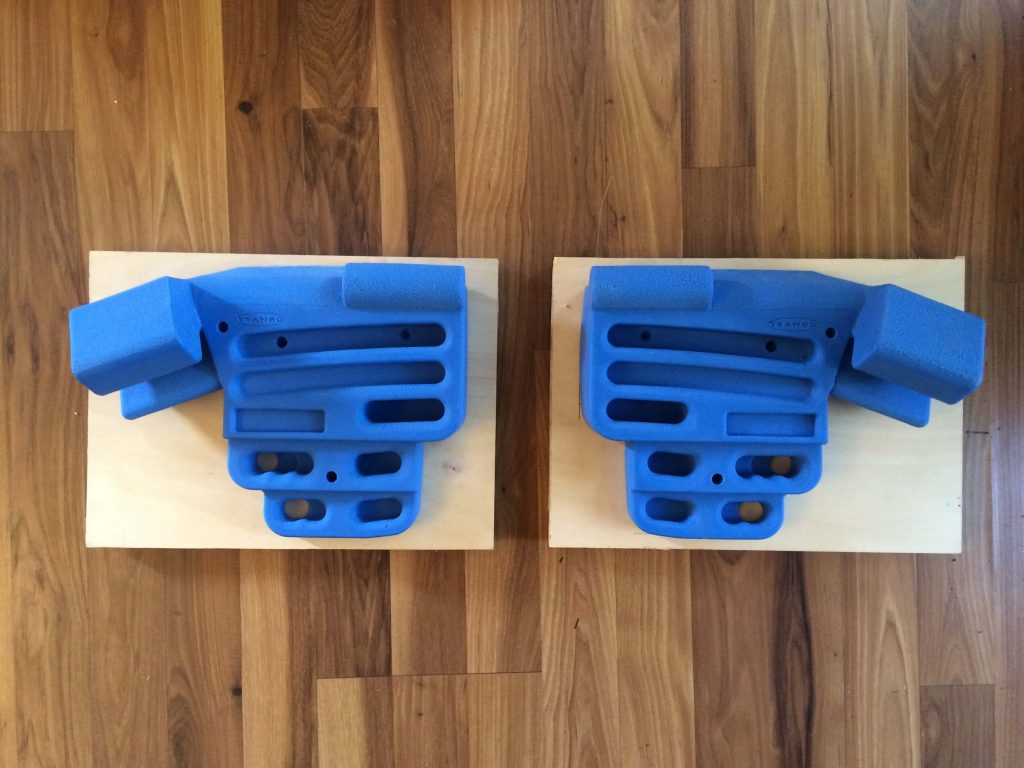 When it comes to hangboards, the market is extremely diverse.

I have owned three different types for home use, and every climbing gym I go to has some new (or old) variety I’ve never seen before!

Some companies have been selling the same hangboard for what seems like forever, while other companies are coming out with new crazy designs that look really cool, but who’s to say whether they are any good?

When I heard about the Trango’s Rock Prodigy Training Center (RPTC), I was instantly intrigued by their focus on providing a functional, tested, and proven training device.

Well, I tried it out, and here are my two cents…

Read on for the full review, or see how the RPTC compares to other top options in our guide to the best hangboards.

VERSATILE
This hangboard does everything! It is extremely versatile, both in its variety of holds and the individual climber’s ability to customize the mounting position. The RPTC is split into two halves, right and left, which means you can adjust the spacing to whatever distance is most comfortable.

To take full advantage of this, I mounted my RPTC using the adjustable French Cleat system. Essentially, I can slide each side of the board along a metal railing, depending on which hold I’m using. 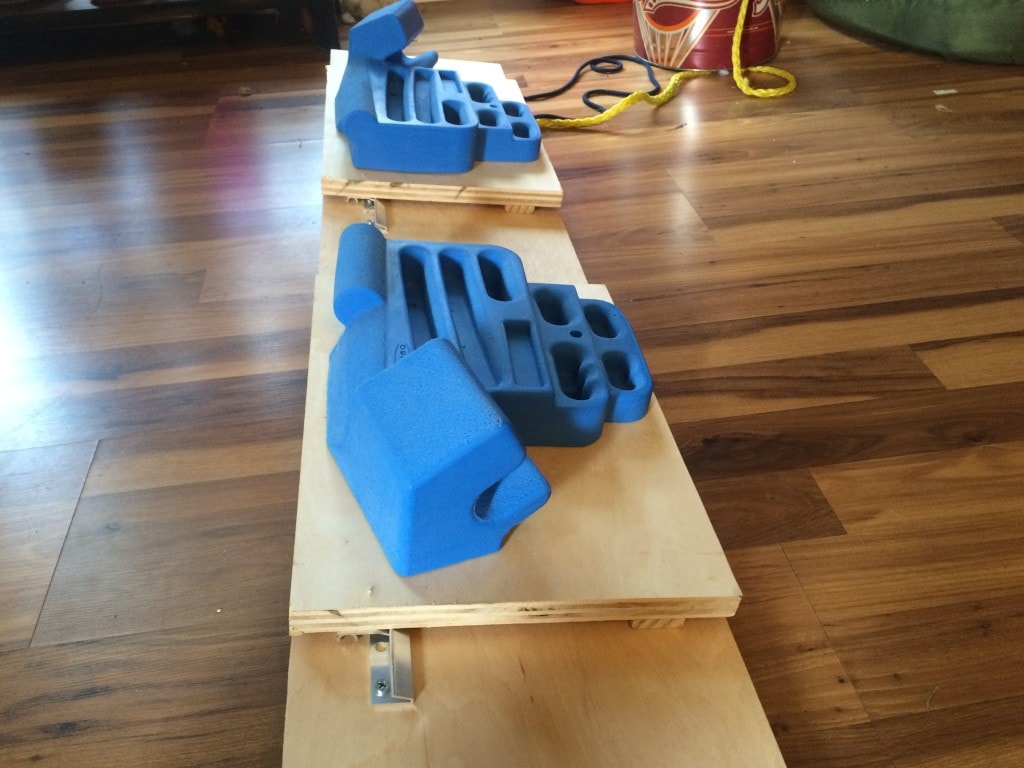 ERGONOMIC DESIGN
The RPTC has a super ergonomic design. Most hangboards don’t go out of the way to improve this factor, but the slightly tilted angle on the crimp rails and the larger angle on the pinches actually go a long way to save not just your fingers, but also your wrists, elbows, and shoulders.

Compared to other boards, this one definitely felt better on the joints. The pockets are also very intelligently designed with safety in mind.

On my first hangboard, I ruptured an A2 pulley on the shallow two-finger pockets. Maybe I wasn’t quite ready or quite warmed up for them, but I do believe that those pockets were way too advanced compared to other holds on the board. The RPTC, although it hosts a wide variety of holds, doesn’t push the limits too far. Hangboards are for getting stronger, not getting injured.

GREAT TEXTURE
Additionally, the hold texture is so great, even Goldilocks would be jealous. No excessive skin loss, no spontaneous slipping. All in all, the only pain I’ve felt on the RPTC is the good kind!

The focus on functionality is what makes this hangboard great, but it still looks cool, too. It’s very recognizable, and other climbers will either look at it and be like, “Oh wow, you have the RPTC!” or they’ll be like, “Whoa, that’s a cool looking hangboard!” I’ve gotten both.

MORE THAN JUST A HANGBOARD
The RPTC is aptly named a “Training Center” because it’s much more than just a hangboard — it’s the basis for your training regimen. The board was designed to go hand-in-hand with The Rock Climber’s Training Manual, a book released by the same people who designed and tested the RPTC, Mike and Mark Anderson. This means there are countless routines available, both in the book and online, to support your training. I’ve been using the book and board in combination and have seen some impressive results.

To illustrate, I’ve been climbing for almost seven years, but for the first six months of this year I was out of commission dealing with elbow and shoulder injuries. I was nervous at first getting back onto a hangboard, not sure how strong my fingers were or how my recovering injuries would react. But, with guidance from the book, I learned how to start off easy and progress slowly. Now, after two and a half months of use, my injuries are only getting better and my fingers are only getting stronger.

Progression on the RPTC is extremely measurable. Little elevated dots along the crimp rail allow you to remember your hand positions from one session to the next. I didn’t use the harness, rope, and pulley system (mentioned in the book), but that can also be used as a way to progress onto harder holds more gradually.

DIFFICULT TO MOUNT
Compared to other hangboards, the mounting procedure can be a lot more difficult with this board. My French Cleat design made things more complicated, but even the simplest version of drilling the halves straight into the wall requires more thought and preparation than a typical hangboard.

You will have to choose how you want to space the two halves, and there aren’t really any guidelines on how to do that, so you just have to guess. Then, you have to be careful to make sure the two halves are aligned so one isn’t higher on the wall or rotated more than the other. Some careful work with a ruler and pencil, though, can take care of this issue.

Additionally, the RPTC is larger than most hangboards which makes it harder to find a good mounting location. Adding in the French Cleat system only increases the amount of horizontal space you need, so size could be a limiting factor for you.

NOT IDEAL FOR BEGINNERS
The RPTC doesn’t have many easier hold options — there’s a rather large difficulty gap between the jugs and all of the other holds. Therefore, I wouldn’t recommend this hangboard to beginner/low-intermediate climbers.

Additionally, because of RPTC’s high price, mounting difficulties, and subtle training features, I would only really recommend this board to people who are serious about training and climbing comfortably at the V3 or 5.10 levels and above. Otherwise, the board and its features may go largely unused or unappreciated.

But, of course, this board is so great that anyone can benefit from its features, just be prepared for a little more work and a little more of a ‘training’ curve.

The RPTC is by far the best hangboard I’ve ever used and I am thrilled to own one. The price and complexity can be a deterrent, but once you buy it and mount it, you won’t regret it.

If you want to get serious about training, the RPTC is optimized for measurable progression and gives you a unique, highly customizable training center to explore your limits. No tweaky holds, no superfluous design features, just pure functionality that looks good, too.

If you want to compare the RPTC to other top boards, check out our article on the best hangboards.

Trango recently released another hangboard in the Rock Prodigy line, the Rock Prodigy Forge. As far as we can tell, the Forge is meant to be a complement to the RPTC or your other training gear, but (seemingly) not the foundational piece.

This review was conducted by an infrequent contributor to the site.