Plenty of climbing shoes come with some animal-based materials, such as leather or a leather derivative.

For those climbers looking for gear that doesn’t contain any animal products, here is a list of 30 of the best vegan climbing shoes from the top brands on the market.

Jump to a particular brand: 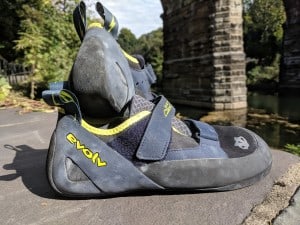 The Defy placed third in our guide to the best beginner climbing shoes. While it isn’t the highest-performing beginner shoe, it is cheap, comfortable, versatile, and vegan.

It can often be found on sale which makes it an even better deal.

The Evolv Shaman is a high-performance bouldering and sport climbing shoe designed by climbing legend Chris Sharma. It’s our top pick in our guide to the best climbing shoes for wide feet.

The Shakra is similar to the Shaman but sports a lower volume and narrower fitting design.

A more modestly priced high-performance shoe. As of this writing it’s in the same price range as many of our favorite intermediate climbing shoes.

A slightly downturned yet comfy shoe with a stiff sole designed for edging.

A climbing shoe designed for amputees. It’s compatible with the Evolv Adaptive Foot (EAF) and the Eldorado Z-Axis Climbing Foot from TRS Prosthetics.

The Team VXi comes with some of the most intriguing rubber on the market, Stealth Mi6. According to Five Ten founder, Charles Cole, a producer of Mission Impossible: Ghost Protocol called him and asked for a shoe with rubber that could “climb glass” (for the scene in which Tom Cruise climbs the Burj Khalifa).

The Mi6 compound was the result of that endeavor, and the Team VXi is currently the only Five Ten shoe that contains the compound. It is supposedly the stickiest stuff on the market, and it’s also vegan-friendly.

The Anasazi Lace is worn by plenty of pros and excels at crack and trad climbing. Sonnie Trotter and Tom Randall (of Wide Boyz fame) both climb in the shoe, and Kevin Jorgeson (of Dawn Wall fame) climbs in the Lace’s now discontinued sister version, the Lace Blanco.

The Anasazi Lace was so beloved by climbers that customer complaints brought the shoe back ‘from the dead’ after Five Ten tried to discontinue it.

The Team 5.10 is another top bouldering shoe from 5.10. The shoe fits incredibly tight and is one of the best hooking shoes on the market. It also edges, smedges, fits into pockets, and feels the rock incredibly well. Finally, despite its downturn, the Team 5.10 is good at smearing, too.

The Anasazi VCS is a sport climbing powerhouse that excels on vertical rock. Its flat sole makes it comfortable enough for extended wear, so you can use this shoe on long, multi-pitch routes.

Stealth C4 rubber, a favorite compound among sport climbers, is vegan-friendly and makes the Anasazi VCS great at edging on credit-card-thin edges. For more info, read our in-depth review of the Anasazi VCS.

The Anasazi Pro is incredibly similar to the Anasazi VCS. To make this shoe, Five Ten started with the Anasazi VCS and then added a Stealth Mi6 toe patch and made some minor changes to the closure system and added a little more heel tension which “gives the Pro a bit more aggressive and precise fit.”

A softer, lower-volume, and more sensitive shoe relative to other options in the Five Ten range.

Unfortunately for those searching for vegan climbing shoes, La Sportiva uses leather or a leather derivative in virtually every shoe it makes. There is just one type of La Sportiva shoe that is 100% vegan-friendly: the Oxygym. You can also read here about vegan alternatives to popular La Sportiva shoes.

As the name implies, the La Sportiva Oxygym is designed with indoor climbing in mind. The shoe is washable so if your feet are known to smell particularly bad then maybe you’ll want to explore this option.

However, it seems to me the washable feature was included for climbing gyms so they could buy lots of pairs of these shoes as rentals and then wash them in a washing machine at the end of the day.

One of Mad Rock’s highest-performing shoes for bouldering and sport climbing. The break-in period might be a little tough but you’ll come out on the other side with an edging and heel hooking machine on your hands… or feet in this case.

The Redline is downturned and strategically directs your power and precision to the tip of your big toe. The shoe also has a nice level of sensitivity which allows you to feel the features of the rock underneath your feet. These shoes can climb at any level. They won’t hold you back from tackling your projects.

For the performance it can crank out, the Shark 2.0 is an incredible value. The outer of this shoe is virtually all rubber which allows you to stick any and every part of your foot to the rock.

This Velcro slipper is moderately downturned with an asymmetrical toe box. It is a great transition shoe for those women looking to get a higher-performing pair without dishing out an exorbitant amount of dough.

The Lotus is best for sport climbing and bouldering. It’s also a nice combination of performance and comfort. For what you get, the shoe is a great value and offers a lot of bang for your buck. Read the reviews at the link above for an idea of what size to get.

After a break-in that puts up a little bit of a fight, you’ll have one solid vegan climbing shoe. The design also looks pretty cool by climbing shoe standards.

The M5 is a comfortable and versatile shoe that is particularly adept at toe and heel hooking. It’s a solid intermediate-level shoe that works well for sport climbing and bouldering.

The Pulse Positive and Negative are designed to be comfortable and tailored towards more beginner-level climbers.

Just like the Pulse Positive, but designed for people with lower-volume feet.

If you’re looking for a vegan climbing shoe for your little climber, here is your second option. The specs on some online retailers’ product page say this shoe comes with “SupaSuede leather”, but Mad Rock has confirmed for me that the climbing shoe is vegan. SupaSuede leather could either be an old material (possibly from the original Mad Monkey?) or a mistype.

The Mad Monkey 2.0 is comfortable and a good, cheap pair of shoes built to withstand the wear and tear of a young climber.

The Tarifa has been referred to as Tenaya’s do-it-all shoe, and it lives up to the title. One blogger compared the Tarifa to the La Sportiva Miura in terms of how well-rounded it is. It can climb on friction slabs, overhung terrain, and vertical faces, and it does all at a high level. It is slightly downturned but comfortable enough to wear for extended periods of time.

The speed lace up system sounds like a bell-and-whistle feature but does a good job of offering the speedy removal of Velcro straps with the customizable fit of laces.

Have you ever heard of Alex Megos? You know, the German wunderkind who nabbed the world’s first 9a onsight and climbed Bishop highball Lucid Dreaming, V15, in 11 days?

Well, the Oasi is his climbing shoe of choice, he climbed both of the above climbs in it, and — best part — it’s also vegan. If Alex Megos can use it to onsight 9a and send V15, that should be evidence enough that this shoe will let you climb at your highest level.

The shoe is downturned with a Velcro strap closure, two features that have drawn plenty of comparisons to the La Sportiva Solution. The Oasi is comfortable for its aggressive nature and also highly sensitive — it’s one of the softer high-performance shoes on the market.

The Tatanka is Ramon Julian’s go-to performance shoe and is a third high-performance option in the Tenaya line-up. Notably, the shoe is an impressive combination of comfort and aggressiveness.

The Inti is at home on vertical faces and friction slabs. It is soft, sensitive, and smear-tastic.

A comfy, flat-soled shoe for intermediate climbers interested in tackling long, vertical faces. Has the makings of a good multi-pitch shoe.

For those of you who are fans of the La Sportiva performance but not the animal-based materials (which are most often leather or a leather derivative), here are vegan alternatives to some of the most popular La Sportiva shoes.

NOTE: These shoes are alternatives in the sense that they are designed for comparable styles of climbing as the La Sportiva shoes. They are not necessarily similar in fit or sizing.

What in a Climbing Shoe Can Come from Animals?

Lining. Some climbing shoes have a leather lining. Again, shoe makers list the lining material on their site. All of the above shoes are either unlined or use a synthetic lining material.

Adhesive & Dye. In rare cases, some adhesives or dyes may contain animal-based ingredients. Climbing shoe makers don’t list the adhesives and dyes they use in their shoes on their websites, so these are the most difficult parts of the shoe to confirm as vegan-friendly. To do so, I personally emailed all of the climbing shoe manufacturers mentioned in this article to confirm that their shoes do not include animal-based adhesives and dyes.