Arc’teryx Aperture Chalk Bag Review: Is It Worth It? 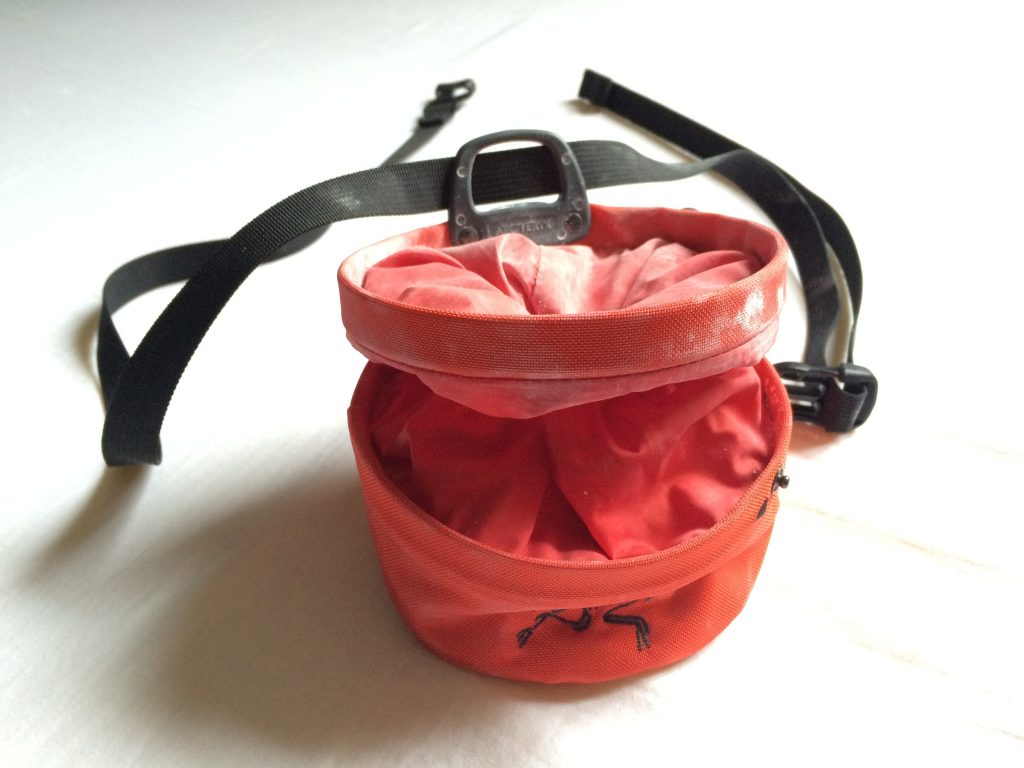 The Arc’teryx Aperture sports an innovative closure and a high price. Is it worth it? Let’s find out.

My hands-on Arc’teryx Aperture chalk bag review put this bag to the test in a variety of settings and climbing styles.

At the end of it all, I have this to say: this is one of the best chalk bags for sport climbing out there.

The chalk-tight closure system really is chalk-tight. That’s right — no more climbing chalk dust in your car or climbing pack. This innovative feature truly enhances the quality of the bag.

The bag also remains wide open at any angle and has the most well-designed belt of any chalk bag I’ve ever used.

However, the Aperture chalk bag isn’t good for bouldering because it can’t stand upright by itself and it has trouble holding a climbing brush when placed on the ground. Don’t get it if you mostly boulder.

Compared to Other Top Chalk Bags

Note: If you’d like to compare the Aperture Chalk Bag to other top bags, check out our guide to the best chalk bags. 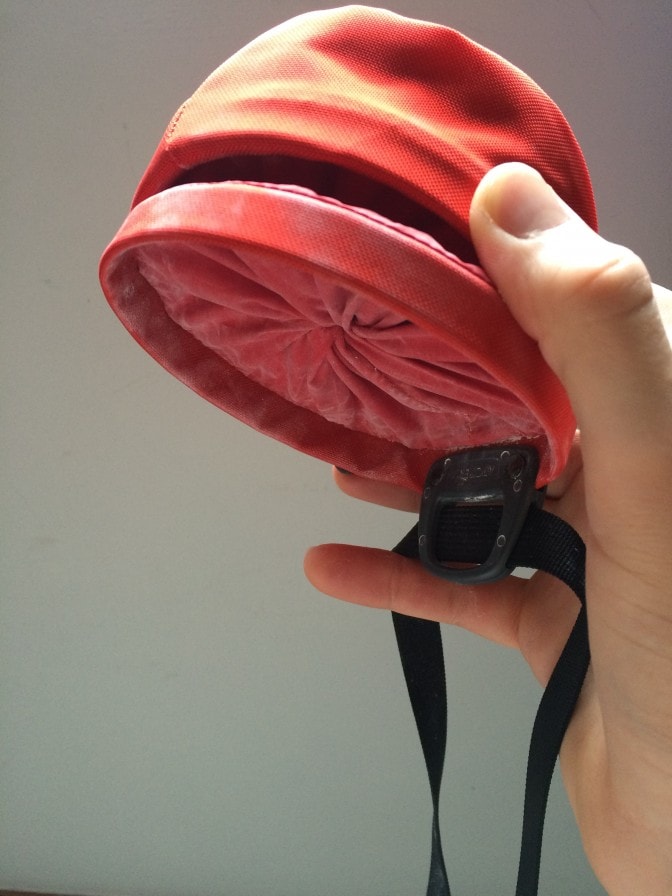 The Aperture’s closure is truly chalk-tight. That’s right — no more chalk dust in your car or climbing pack!

The Aperture chalk bag’s defining feature is its closure system. If you don’t know, you can get a chalk-tight close from this bag by twisting and snapping it shut.

When you do this, the bag becomes incredibly easy to transport since it compacts the chalk bag and prevents any chalk from coming out. The photo is of me holding the bag upside down without any chalk coming out.

The pull cord on my old chalk bag would never tighten enough to prevent chalk from coming out — there’d always be an opening where puffs of dust or little chalk crumbs would spill out from. This bag eliminates that annoyance.

Also, I was initially worried that the chalk bag wouldn’t hold much chalk when twisted close, but it actually holds a surprising amount.

This chalk bag is meant for sport climbing. With that in mind, it might actually be one of the best chalk bags out there for sport climbing. It is durable and well-designed, it can hook to your climbing harness or you can strap it around your waist with the belt — which, might I add, is the best belt I’ve ever had on a chalk bag.

What also makes it great for sport climbing is how open and accessible the bag stays when you’re climbing with it. At times I have trouble getting my hand into my other chalk bags when chalking up on the wall. I have never had that issue with this bag. No matter what angle the bag is at you’ll be able to get your hand into it.

I’ve been blown away by the quality and durability of every piece of Arc’teryx gear I’ve owned. The Aperture keeps with that trend. Mine has held up well despite being dragged up the wall countless times.

While being well designed for sport climbing, the Aperture chalk bag doesn’t work as well for bouldering mainly since it doesn’t stay upright on its own. It collapses on itself when placed on the ground, so you have to pick up bag every time you want to access the chalk inside. 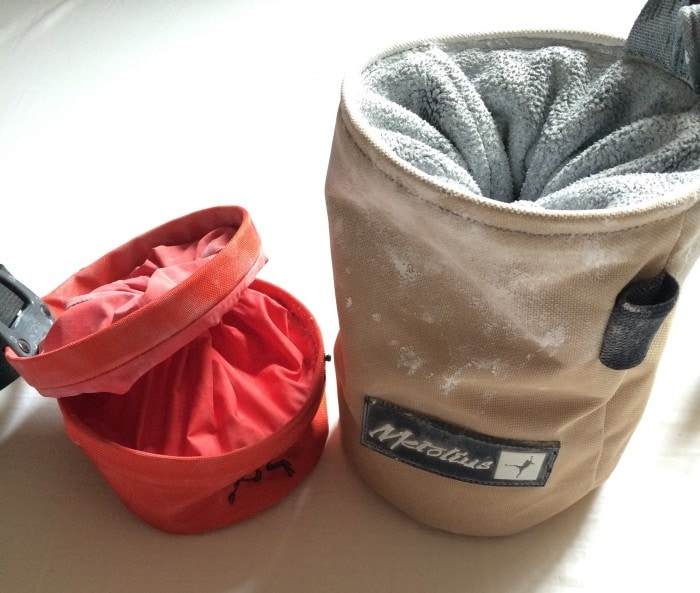 The Aperture’s closure system comes with a trade-off: the floppy midsection prevents the bag from standing upright on its own. It wasn’t an issue when sport climbing, but we found this annoying when bouldering.

For someone like me who chalks up often while bouldering and is used to being able to easily stick both hands into an upright chalk bag, this can be annoying. If you’re a sport climber, though, you won’t run into this issue.

Another reason the Aperture chalk bag isn’t good for bouldering is its brush holder. The loop you stick your brush into is floppy and only holds brushes well when the bag is around your waist.

When the bag is on the ground, since it doesn’t stand upright, the bottom of the brush touches the ground and can be pushed out or flop over on its side. 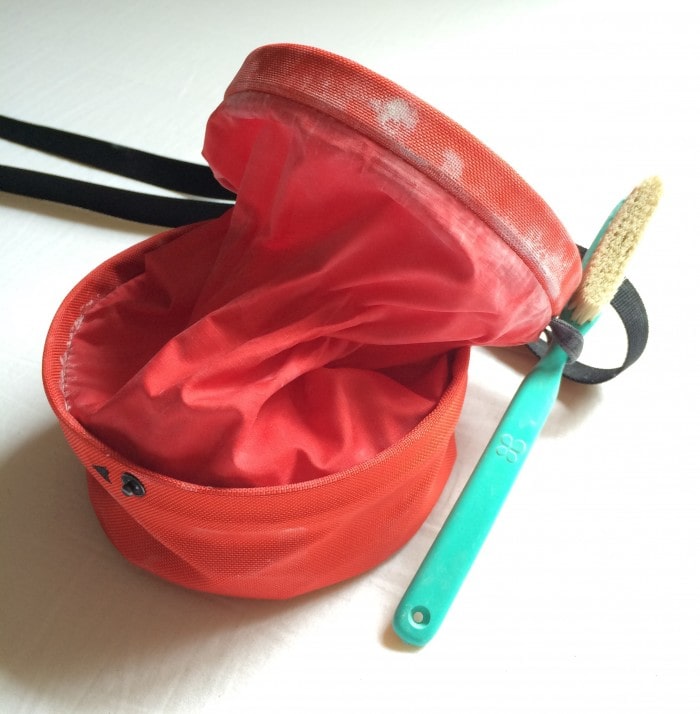 Even placing a climbing brush in the brush holder doesn’t help the bag stay upright.

Yes, Arc’teryx gear is high-quality and the Aperture is an innovative product, but we’re still talking about Arc’teryx here. Their gear is almost always eye-poppingly pricey. The Aperture is an expensive chalk bag, especially compared to the value options out there.

If you’re a sport climber and having a chalk-tight closure is important for you, this bag is pretty worth it. Otherwise we recommend you look at other options.

My Arc’teryx Aperture chalk bag review determined that this bag is great for sport climbing but not ideal for bouldering. If you mostly sport climb then this is possibly the best bag you can find. The chalk-tight closure system is incredibly useful and it stays open at all times when around your waist.

If you mostly boulder, though, don’t get this bag. Go for a chalk bag that stands upright or a good chalk bucket.

Alex Beale is 99Boulders' founder and editor-in-chief. He's been professionally testing and reviewing outdoor gear since 2015. When he's not outdoors camping or backpacking, he can be found at the climbing gym, training hard in hopes that he'll one day be as strong as the 10-year-olds.