After performing timed boil tests of five of the best alcohol stove fuels and taking into account the price and burn cleanliness of each brand, we think Crown Alcohol Stove Fuel is the top option.

On average it was the second quickest to bring a cup of water to a boil. It’s affordable. And here’s the kicker: it’s clean-burning, meaning it produced no soot.

Klean Strip Green Denatured Alcohol was another solid performer. It boiled water the third fastest and produced only a small amount of soot. If you want a low-methane alcohol fuel it’s your best bet. It contains less than 5%. 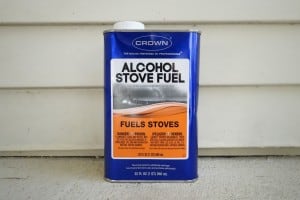 It’s affordable and widely available. It was the second-fastest fuel to boil water. And unlike the fastest fuel, 99% isopropyl alcohol, it didn’t produce any soot.

The Crown fuel is technically denatured alcohol, though it contains a majority methanol — 65-75%.

Methanol is toxic (a potential cause for concern which we discuss later on) making this the only real downside to this fuel.

Also, the flame is virtually invisible in daylight. Exercise caution when cooking with it because it’ll be difficult to know if your alcohol stove is lit just by looking at it.

As of this writing the safety data sheet (SDS) for another Crown product, Crown Denatured Alcohol, shows it has a potentially identical composition to Crown Alcohol Stove Fuel (I say “potentially” because it contains ranges as opposed to exact percentages).

Because of the similar SDS I suspect they are similar or near-similar products with different names and packaging. If Crown Denatured Alcohol is all you can find I imagine it’ll work about the same. 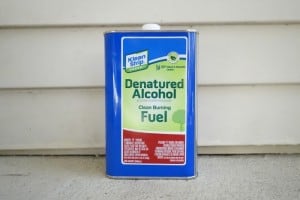 Our Top Pick, Crown Alcohol Stove Fuel, contains 65-75% methanol. Methanol is toxic and accordingly some backpackers like to avoid using it as fuel.

It still contains methanol so you absolutely would not want to consume it and should avoid inhaling the fumes, but from a chemical composition standpoint it’s not as toxic.

It’s in the same price range as the Crown fuel and also widely available. Plus it took only 15 more seconds on average to boil water.

It did produce a small amount of copper-colored soot on the bottom of the mug after burning. But unlike the soot produced by isopropyl alcohol it wasn’t a complete mess to handle. 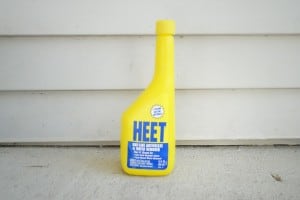 HEET might very well be the most popular alcohol fuel on the trail today.

It’s cheap and widely available. It produces no soot when burned. It doesn’t boil water the quickest, but there was a difference of a little over 20 seconds between the HEET and Crown Alcohol Stove Fuel times.

HEET is basically pure methanol, however, and methanol is toxic. It can enter the body by ingestion, inhalation, or absorption through the skin.

When conducting the boil tests I certainly inhaled some fumes. When filling the alcohol stoves with fuel some of each fuel inevitably got on my fingers. It’s hard to avoid.

I wouldn’t doubt for a second that some methanol enters my body every time I use HEET as fuel. But I have no clue how much. And, of course, the dose makes the poison.

Many hikers are quick to point out that despite the popularity of HEET as alcohol stove fuel you don’t hear about backpackers experiencing methanol poisoning. Consider that some thru-hikers no doubt use HEET with their alcohol stove most nights on the trail and the risk doesn’t seem too great.

Still, I have yet to find a satisfactory answer to the question of how dangerous methanol is to use as alcohol stove fuel.

You can always mitigate the risk by handling it with care and staying upwind of the fumes while cooking. But ultimately you’ll have to decide for yourself whether or not it’s worth the risk. 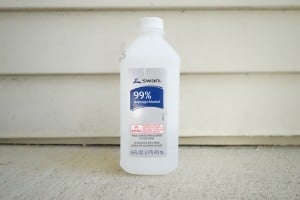 99% isopropyl alcohol boiled water almost a minute faster on average than any other fuel we tested.

Yet, it was such a sooty mess to burn that we don’t recommend it at all.

Even after burning a single ounce our mug was so fully coated in soot that even picking it up proved to be a messy ordeal.

Storing a sooty cook pot in your pack would be a nightmare unless you bagged it.

What’s more, the soot made it all the way to the rim of the mug. If you were to take a sip from your backpacking mug after having cooked with isopropyl alcohol the soot would immediately rub off on your lips. This effectively prevents you from consuming any food or beverage that has to be drunk from your mug or backpacking cook pot.

Soaking the mugs in water for hours removed hardly any soot. To get it off I had to use steel wool and plenty of water, dish soap, and elbow grease.

Cleaning off the soot on the trail would be no small task. It would require copious amounts of water and biodegradable soap. A simple sponge would have a tough time removing it all.

It’ll work in a pinch, but it’d be such a hassle to use isopropyl alcohol as fuel that we think it’s best you don’t. The extra minute you’ll save on boil time will be repaid dozens of times over when you go to wash dishes at camp. 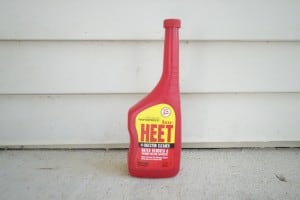 Iso-HEET is also mostly isopropyl alcohol — 98.5% according to the SDS.

Thus it has the exact same problem as the 99% version we tested: it’s a sooty mess to burn and cleaning your mug or cook pot afterwards is not easy.

Iso-HEET was the slowest fuel we tested. It took on average over six minutes for an ounce of it to boil a cup of water.

What’s more, it’s even more expensive than its sibling product, Yellow HEET. We found no compelling reason whatsoever to use it as alcohol stove fuel given the other options available.

How to Choose the Best Alcohol Stove Fuel for Your Needs

Ethanol tends to be the most expensive type of alcohol fuel and the hardest to come by. However, it is a top option because it has a high heat content and is clean-burning relative to the other types.

We didn’t test any pure ethanol fuels because of cost and availability.

Denatured alcohol (aka methylated spirit) is ethanol that has additives such as methanol to make it toxic so as to discourage recreational consumption and exempt it from liquor excise taxation. It’s a popular alcohol stove fuel because it’s affordable, relatively clean-burning, and more widely available than ethanol.

Different brands add different levels of additives (mainly methanol). Some brands contain as much as 80-90% ethanol while others contain between 20-30%.

Methanol is a toxic, flammable chemical which is popular as alcohol fuel due to its price and availability.

Methanol can enter the body by ingestion, inhalation, or absorption through the skin. However I have yet to see a satisfactory answer to the question of how dangerous it is to use as fuel.

You’ll have to decide for yourself whether or not it’s work the risk.

Isopropyl alcohol (aka isopropanol) is a colorless, flammable chemical that is cheap, widely available, and has a high heat content.

However, it does not burn cleanly. Even burning one ounce of isopropyl alcohol left our mugs covered in a layer of soot. It was such a mess to handle and clean the mugs afterwards we don’t recommend it as alcohol stove fuel.

How to Find & Read an SDS

Most of the fuels we tested have an SDS which we linked to when possible.

If you’re looking for an SDS for a fuel we didn’t test, first consult the label. Sometimes it will include a URL you can visit to find the SDS.

If not, visit the brand website and browse around. Usually somewhere on the site is a link to a database where you can search for your product’s SDS.

If all else fails a simple Google search for “[product name] sds” should do the trick.

Once you’ve found the SDS, for backpackers’ purposes some of the most important information in it is in the section usually titled “Composition/Information on Ingredients.”

This section contains the breakdown of ingredients with ballpark percentages of their proportion by weight. By browsing it you can quickly get an idea of how much ethanol, methanol, and additives a formula contains.

A boil test is a classic way to determine the efficacy of fuel. So for this guide I set about doing just that.

Using a kitchen scale, I filled each mug with exactly eight ounces of water and each stove with exactly one ounce of fuel.

Then I lit the stoves and waited 30 seconds for them to warm up before placing a mug on each stove, adjusting the windscreen, and starting a timer. I watched and recorded when each mug started boiling.

I repeated this test three times, washing the soot off the mugs after each round to ensure it didn’t affect boil times. I also swapped the mugs and windscreens around to different stoves and switched up the order in which I lit the stoves.

Note: All times in the table below are in seconds (s).

The average boil time of each fuel was an important consideration in our scoring. I also took into account the amount of soot produced by each fuel because, as I’ve mentioned, it was a mess to handle the soot-covered mugs and the soot took lots of elbow grease and steel wool to remove.

Note: The boil tests were conducted at an elevation of 900′ with mid-70° temperatures.

8 Expert Tips to Extend the Lifespan of Your Sleeping Bag