From garden-variety athletic tape to specialized finger tape, we tested seven of the best climbing tapes on routes across the country to see which held up best. The winner is the USA’s own Metolius Climbing Tape, a reliable Top Pick despite sophisticated competition.

Tape is one of the constants of climbing life — like beta sprayers and bolting debates, it always seems to have a place in the world.

Most of these tapes are respectable performers. Even the worst of these competitors was serviceable given time and enough retaping jobs. Still, we found ourselves reaching for a select few rolls when it really counted. Read on for the details. 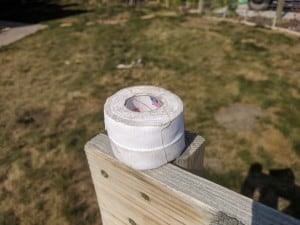 Metolius comes away with our highest honors because of its reliable performance.

It’s our favorite tape with which to wrap crack climbing gloves because of its stickiness and ease of use.

It’s among the stickier varieties in our test, which we appreciated — I wore the Metolius on one hand for a 12-pitch alpine crack climb, and at the end of the day the glove was fully intact.

It works just as well on the fingers. It’s not the easiest tape to rip, but it splits easily into smaller widths. I generally consider myself to be an unskilled tape-ripper, and I could use the Metolius with only mild struggle.

The only real downside of the Metolius Tape is that ripping it off can be a little painful, especially for those of us with hairy hands.

This is an easy price to pay for stickiness and versatility, and the Metolius still wasn’t as troublesome as the Evolv or Leukotape offerings.

Best of all, Metolius rolls are reasonably priced and available at most half-decent gear stores. If you need an all-purpose daily driver, look no further. 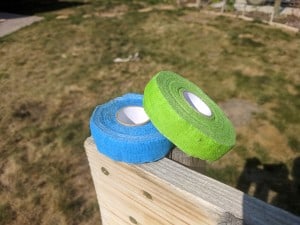 By far the most unusual tape in our test, the Evolv Magic Finger Tape was a polarizing performer.

Some testers preferred it, while others wouldn’t touch it after their first use. Woven of latex rubber, the Evolv tape has a mesh-like surface that somewhat mimics the feel of skin.

The first time I used this tape, I shored up a few finger phalanges for support and protection on finger cracks. Two of my tape jobs fell off after two pitches; the other two had to be cut off at the end of the day.

After that experience, I understood why Evolv puts pictogram instructions on the packaging. As odd as it sounds, this is a tape with a learning curve.

The Magic Finger Tape doesn’t stick to skin much at all, but it sticks to itself like hell. With judicious use of Evolv’s taping tricks (like overlapping a small tab at the beginning of finger wraps), it’s very supportive.

The trouble seems to be getting consistent results. Even at the end of the testing period, I found myself having to rewrap fingers from time to time.

Because of its mesh-like surface, this tape is among the most breathable we tested, making it less noticeable on the hand. It provides better traction than more standard tapes, which is a blessing after wrapping a split fingertip.

Due to these advantages and its impressive customizability, the Evolv takes home an award for the best finger tape. It’s too thin to make crack gloves out of, but for finger-related uses it’s an excellent width. Just be prepared for a little frustration along the way. 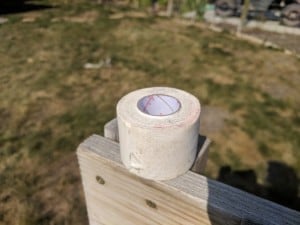 Tape is relatively cheap, so a Best Value award carries less weight than it might in other arenas.

This tape was not our favorite, but it was also not our least favorite. We did make crack climbing gloves with it, and it was a middle-of-the-pack performer.

It was more supportive and durable than we expected, especially on tricky finger wraps. It’s not as sticky as the Metolius or Leukotape, but with careful work it was entirely adequate. It’s also easy to tear and manipulate, and it resists sweat well.

The J&J was usually cheaper than any competitor. If you don’t have a gear store in your area, fear not — just head to your pharmacy or grocery store and pick up some J&J.

Reviews of the 4 Other Climbing Tapes We Tested 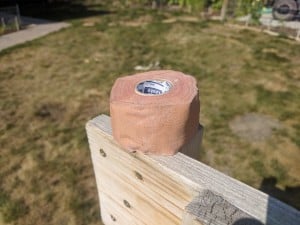 Leukotape’s version of athletic tape feels serious, from its nude coloring to the medical-themed packaging.

It’s so serious that on Amazon it’s categorized under “Industrial & Scientific,” instead of “Sports & Outdoors.”

The performance is equally robust. “It feels like it’s fused to my skin,” said one tester after wrapping up in Leukotape.

The Leukotape felt the stickiest of any tape in our test. It almost always remained exactly where wrapped, even through rain, sweat, blood, and sustained abuse.

Normally, “stickiest” would be an honor in the world of tape, but in this case it’s also the Leukotape’s main weakness.

One tester built a crack climbing glove out of the Leukotape. At the end of the day, the tape hadn’t budged a bit, but the tester spent a full 20 minutes trying to remove the tape before giving up and reaching for a climbing knife. Even then, he lost most of the hair on the back of his hand.

The Leukotape also comes with a serious price. Even with 45 feet per roll, at the price found at most online retailers it’s easily the most expensive tape in our test.

If you have extra sweaty hands or you need tape that absolutely will not move (such as for stabilizing an injury), this stuff is for you. For most climbing applications, however, we felt that other offerings did the job for less. 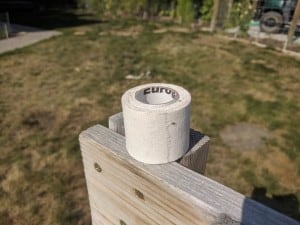 Trango is Mueller’s USA distributor, so you’ll often find Mueller EuroTape (and MTape) being sold under the Trango brand.

It’s still the same old Mueller tape. This tape is a frequent favorite in the climbing world, and I had high hopes for it heading into the test.

Sadly, the EuroTape did not live up to the hype.

I expected stickiness and versatility to rival Metolius, but the EuroTape was noticeably less adherent and durable. It’s a reasonable performer, but I found myself needing to retape after a pitch or two, especially if I was crack climbing.

On the plus side, the EuroTape is easier and more pleasant to remove than the stickier offerings. Some testers preferred the EuroTape for its removability when only a single pitch of crack climbing was required. It’s easy to tear and manipulate, which makes application stress-free.

Still, testers preferred tape that would stay put when it counts. The EuroTape isn’t bad, but its mediocre performance landed it in the middle of the pack. 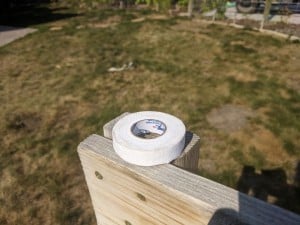 Manufactured by a US-based company called Jaybird, this tape is sold by both Libery Mountain and Cypher. It’s another run-of-the-mill performer, neither awful nor especially good.

The roll we tested was only a half inch thick, which restricted its use to finger taping. It also comes in 1-inch and 1.5-inch widths, which is convenient for climbers who prefer specific widths for different uses.

The Liberty Mountain isn’t as sticky as the Metolius or Leukotape options, but it stayed in place reasonably well on our fingers. We felt that with proper use the Evolv Magic Finger Tape was more useful in a wider range of wraps, but the LM tape wasn’t too far behind.

A trickier issue is the price. Liberty Mountain sells this thickness for cheap, but other retailers tend to be more expensive. If you can find it cheap, it’s a decent bargain for finger tape, which may be useful for climbers who dislike ripping their larger rolls in half. 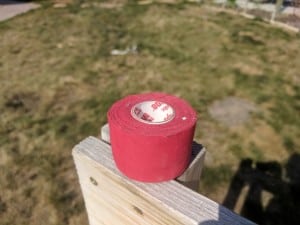 The MTape was the only true disappointment of this test. Available in a cheerful range of colors, it’s Mueller’s cheapest cotton-based offering.

The MTape was a poor performer in almost every test. When used for crack climbing gloves, it was useless after a pitch or two.

On the fingers, it slid at the first sign or perspiration or exertion. With careful wrapping and enough retaping it will work, but testers almost always preferred to reach for other rolls.

The MTape is easy to tear, but the list of virtues ends there. Compared to other top climbing tapes, it doesn’t measure up. It’s not cheap enough to warrant consideration as a budget pick, so it’s a product we don’t recommend.

How to Choose the Best Climbing Tape for Your Needs

If you only ever tape your fingers, you’ll likely want tape in the 0.5-1 inch range, depending on finger size and personal preference. Some climbers prefer to buy wider rolls and rip strips down the middle, though the Evolv Magic Finger Tape is a tempting thinner option.

If you need to wrap larger body parts or make crack climbing gloves, 1.5 inches is the standard width.

Most climbers like a sticky tape, but some testers also prized tapes that were easy to tear or remove. In most cases, the stickier the tape, the harder it is to remove. If you only ever use tape here or there, you might be fine with a less adherent tape.

On the other end of the spectrum, climbers with especially sweaty hands or special taping needs should consider looking at the Leukotape P, the stickiest tape in our test. It was too inconvenient for most testers, but it is a shockingly resilient performer.

How Much Do You Crack Climb?

If you’re taping up for frequent crack sessions, get a stickier tape. The Metolius is our favorite tape for crack climbs. The EuroTape is serviceable but less durable, and the Leukotape is strong but difficult to remove.

We took all these tapes where they’re needed most: a long, action-packed outdoor climbing trip.

We climbed everything from granite cracks to sandstone faces, taping up whenever we faced intimidating cracks or deteriorating skin.

When we returned to civilization, we headed to the gym to see how the tapes would handle sweat and plastic. I even taped up my fingers and hit the hangboard to test finger wraps and traction.

At the end of the testing period, testers rated tapes in three categories: general performance, finger-specific performance, and ease of use. For thinner tapes only the latter two categories were scored, and the overall scores were adjusted accordingly.

How well does the tape stick? Can I use it for things like joint stabilization or crack gloves? How confident am I that the tape will stay in place?

How well does the tape perform in finger support? Do X-wraps or tip-wraps stay in place? How easy is it to climb with the tape on my fingers?

How easy is the tape to tear? How easy is it to manipulate and wrap with? How much do I enjoy using the tape?

10 Drills to Improve Your Bouldering Footwork