We headed out to the woods to test 7 of the best hammock carabiners. After hanging in hammocks, checking the carabiners’ compatibility with various hammock straps, and seeing which were the easiest to clip, our favorite is the CAMP USA Nano 22.

It’s the lightest carabiner we tested, weighing in at a mere 22 grams (0.78 oz). It’s also nicely sized, affordable, and easy to clip and unclip.

However, you may not need to buy a pair of hammock carabiners. Most camping hammocks come with carabiners. The Kammok Roo Double has our favorite included ‘biners of all the hammocks we’ve tested.

Ultimately, carabiners are a minor consideration in your hammock setup. Most will work just fine and open up the same ways to hang a hammock. But if you want the best, read on for our full reviews. 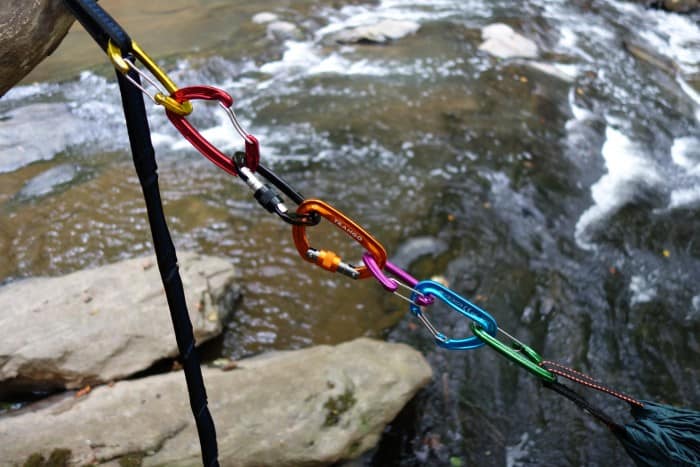 The 7 carabiners we tested 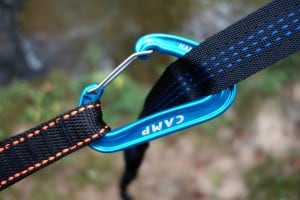 In a field of near-identical products, the Nano 22 was our clear favorite.

It’s the lightest carabiner we tested, living up to its name with a weight of just 22 grams. Hammock straps fit inside easily, and the gate is responsive and snappy.

We liked the Nano 22’s size better than the Metolius FS Mini II, the other ultralight carbiner in this test. It’s larger which made clipping and unclipping a little bit easier.

The Nano 22 is the best of both worlds: ultralight and easy to handle. It works great for backyard hammock users and ultralight hammock campers alike. 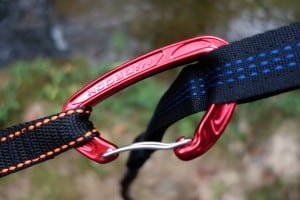 Many climbers know Mad Rock as a producer of decent and affordable climbing gear. The Ultralight Wire Gate lives up to this reputation.

Its weight and price are both respectably low. Its size works with all the top hammock straps and makes clipping and unclipping easy.

It weighs 32 grams, so it’s not “ultralight” when compared to the Nano 22 and FS Mini II. (For the purposes of this review, we defined an “ultralight” hammock carabiner as weighing less than one ounce, or 28.35 grams.) Unless you’re an ultralight backpacker, though, this hardly makes a difference.

Reviews of the 5 Other Hammock Carabiners We Tested 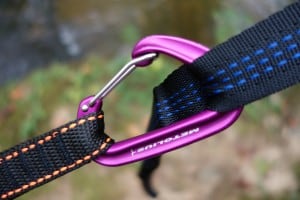 The FS Mini II is the second ultralight carabiner in this review. It’s not lighter than the Nano 22, but it is tinier.

It fits 1-inch hammock straps but would struggle with wider ones. Its size makes it just slightly harder to clip and unclip, too.

The FS Mini II could be right for you if space is at a heavy premium and you’re looking for the tiniest carabiner you can find. Otherwise, go with the Nano 22. 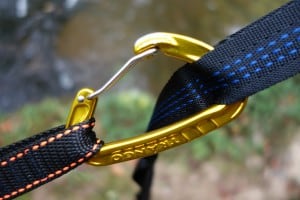 The Phase is similar to the Mad Rock Ultralight Wire Gate. The biggest differences are the weight — a scandalous 2-gram difference — and ease of clipping.

As of this writing it’s also tied for cheapest carabiner in this test with the Metolius FS Mini II.

You can’t go wrong with the Phase. But beyond price there’s no compelling reason to choose it over any of the other options. 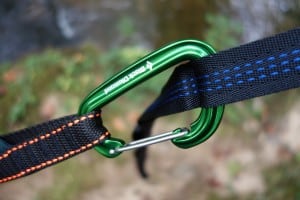 The Neutrino is average when it comes to size, price, and ease of clipping. Where it differs is weight.

It’s slightly heavier than the other non-locking carabiners in this test. In practice, however, the difference is negligible to all but the most weight-conscious backpackers.

The Neutrino is perfectly adequate. But it doesn’t stand out when compared to the other options. 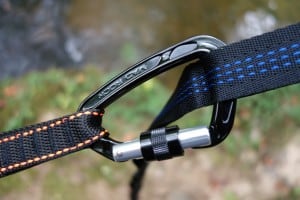 Lockers are used by climbers to secure points that must not fail in their climbing systems. Hammock campers — and hammock users in general — will rarely be hammocking in a situation where their carabiners are stressed to the point of failure. Rarer still is a situation where a carabiner failure would spell serious injury or death. (Unless you’re this guy.)

Regardless, there might be some of you out there who need or want a locking carabiner for your hammock. They do provide extra safety. So we threw a couple into the mix to see how they fared.

The Super Tech Screw was our favorite. We liked its hook-free nose which made clipping and unclipping easier. It’s also the lighter of the two lockers (by a trivial amount). 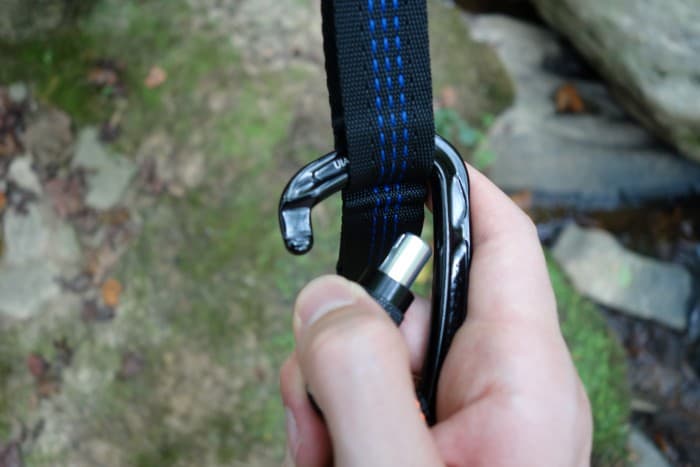 The hook-free nose of the Mad Rock Super Tech Screw doesn’t snag when clipping and unclipping.

But who is this the right hammock carabiner for?

Ultimately it will fill a very specific niche: hammock users who hang their hammocks high off the ground or in otherwise precarious situations.

But based on our experience this use case is so small that we wonder who this would even apply to. We’re not even sure we’ll include locking carabiners in the next update of this review.

If you’re considering the Super Tech Screw because of its hook-free nose, look at our climbing carabiner reviews first. They include some lighter carabiners with hook-free noses.

The SuperFly is the carabiner in this test least suited to hammocking.

It’s the heaviest one we tested. It’s a locking carabiner, too, a type that is largely unnecessary for hammock users.

Plus, despite being a locking carabiner, the SuperFly still has a nose hook which makes it more likely to snag when clipping and unclipping it.

Here are the best hammock carabiners:

How to Choose the Best Hammock Carabiner for Your Needs 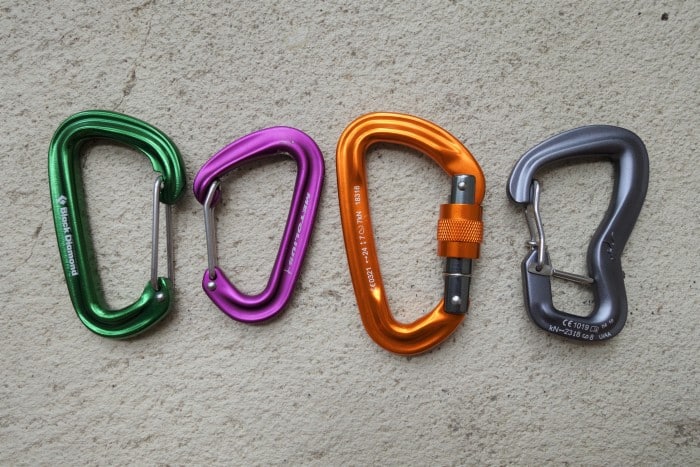 Non-locking carabiners are what most people think of when they think of carabiners. They have the typical D or asymmetrical D shape and a spring-loaded wire or solid gate. (We only tested wiregate carabiners for this review because they’re typically lighter and less likely to freeze shut in winter.)

Ultralight carabiners are simply lightweight non-locking carabiners. They are usually smaller as well.

Brand-specific carabiners: Many hammock brands include carabiners with their hammocks. These range in quality from great to mediocre. The Kammok Roo Double has our favorite included carabiners of all the camping hammocks we’ve tested.

Ultralight carabiners (<29 grams) are, of course, very lightweight. For this review we classified ultralight hammock carabiners as weighing one ounce (28.35 grams) or less.

Locking carabiners (typically >40 grams) are the heaviest of the three types. The locking mechanism adds weight, and they’re designed for use at critical points in rock climbing so they’re beefier as a result. The two we tested for this review weigh over 40 grams.

The rule here is simple: buy carabiners whose weight capacity exceeds the weight you’ll suspend with them.

Brand-specific carabiners and hammock carabiners usually have a weight capacity of 400 pounds or greater. Consult a brand’s product pages to find out exact numbers.

Most non-locking climbing carabiners are CE certified, which means they must meet the following minimum requirements:

There are countless cheap carabiners available on Amazon from budget brands. We didn’t test any of them and instead stuck to carabiners from top climbing gear brands.

Over the years of testing outdoor gear, we’ve learned that some of the budget brands on Amazon have poor quality control. Our advice: stick to gear brands with a solid reputation when buying your ‘biners. 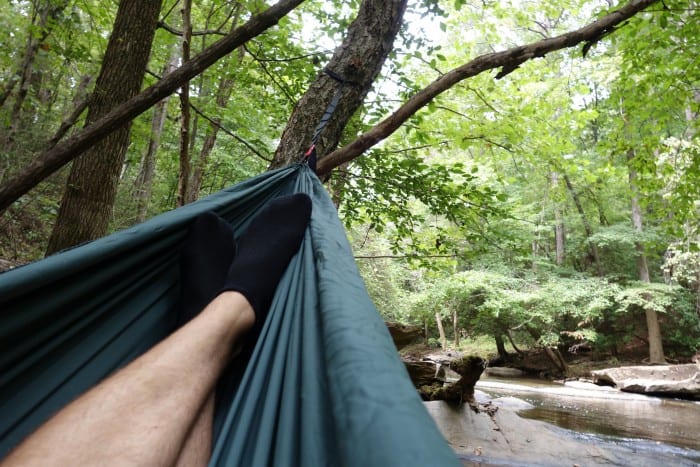 Testing out the Mad Rock Ultralight Wire Gate. It’s hard work, but somebody’s gotta do it.

We went into the woods to do the backbreaking work of hanging in a hammock using each carabiner. In addition to simple lounging, we rocked in each hammock to see how the carabiners held up to this strain.

Most hammock tree straps are 1-1.5 inches wide. Because of this, we wanted to check that each carabiner could fit straps of these widths.

Every carabiner was able to fit both 1-inch and 1.5-inch straps. 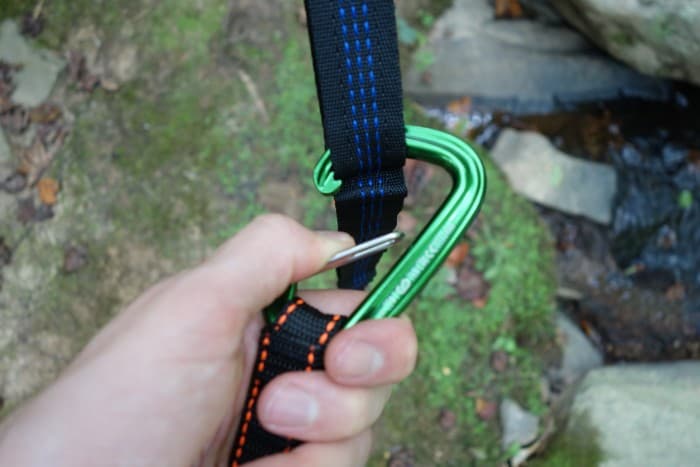 Carabiners with nose hooks can snag when clipping and unclipping. This is a minor inconvenience we think most hammock users will be quick to overlook.

We hung a hammock with some straps then, to test the clip-ability of each ‘biner, we unclipped and reclipped it to various strap loops.

(Four of these carabiners were also included in our guide to the best carabiners for rock climbing. Our climbing gear tester conducted similar tests in that review, so we incorporated his results alongside ours in our scoring.)

Overall, ease of clipping was a minor consideration. Hammock users, unlike climbers, aren’t clipping and unclipping their carabiners often enough for us to weight this performance metric heavily. 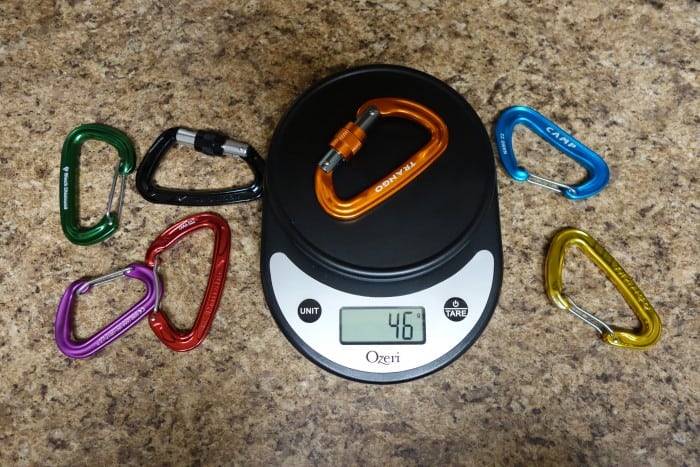 We expect that for most of you weight isn’t a critical consideration. But for the ultralight hammock campers out there, we double checked the weight of each ‘biner on our trusty kitchen scale.