I recruited a 5-person panel (including myself) to blindly taste test 7 of the best powdered peanut butter brands available.

Two brands — PBfit and Betty Lou’s — tied for first with average scores of 3.9 out of 5 stars for taste.

To break the tie we took into account the retail price of each. At the time of publishing PBfit was the better value so we crowned it our winner.

Understandably, brands with added salt and sugar scored better than those without. The 3 peanuts-only brands we tested were our least favorites by a healthy margin. But if a single-ingredient peanut powder is what you’re looking for, we recommend Naked PB.

If you’re curious to know more — such as which brands tasted like “sawdust” and “a limp handshake” according to our testers — read on for our reviews. 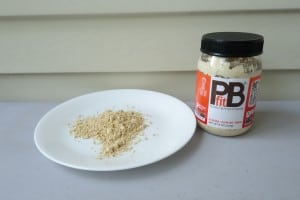 PBfit tied with our Runner-up, Betty Lou’s, for the highest average score. If you want the best tasting powdered peanut butter, this is the brand we recommend.

“#1 — good all around taste and texture,” wrote one tester.

“Good peanut taste,” wrote another who gave PBfit a 5-star score — the only one in the entire taste test.

Testers didn’t have anything bad to say about this brand. The lowest score it received was a 3 out of 5 from two testers (me being one of them) who described it as “sweet.”

I’m not entirely sure why PBfit ended up being the only one tasters described as sweet. It has 2 grams of sugar per serving, the same amount as our third-place pick, PB2, and 1 gram less than our Runner-up, Betty Lou’s. 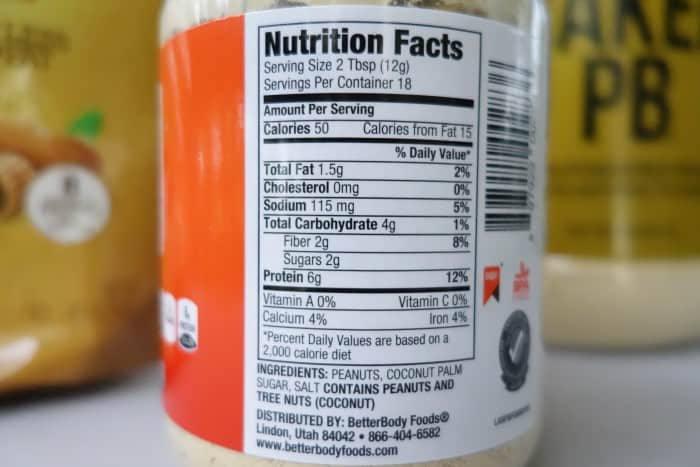 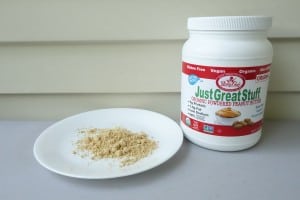 Like I said, Betty Lou’s had the same average score as PBfit. It took home second place simply because it’s a little pricier. You can’t go wrong with either.

And there’s a clear reason why it costs more: it’s organic.

(Though at the time of publishing it’s also pricier than PBfit’s organic powder.)

This brand was my personal favorite. “Nice balance of salty and sweet,” noted one tester, echoing my own thoughts.

No tester disliked this brand. The most lukewarm comment was a simple “decent.” 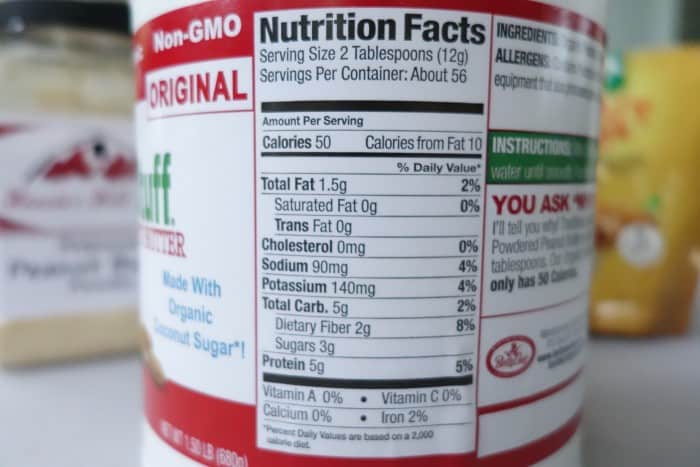 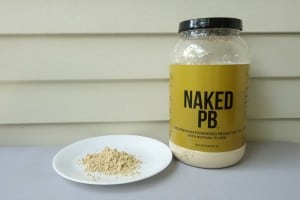 Three of the most common ways people consume powdered peanut butter is in smoothies, pancakes, and baked goods.

If you do, we recommend Naked PB. It was our favorite peanuts-only brand by a slim margin.

But to be frank that’s not saying much. None of the 3 peanuts-only powders scored well. Naked PB had an average score of just 1.9 out of 5 for taste.

Naked PB and the other peanuts-only brands were described using words like “flavorless,” “tasteless,” and “bland.” This makes sense: anywhere from 85-90% of the fat is removed from peanut butter in order to turn it into powder. If you don’t add in any salt or sugar expect it to have little to no taste.

Of course the upside of a peanuts-only peanut powder is you can control how much salt and sugar you add, if any. And even without salt and sugar it still does add a mild peanut butter taste to recipes.

And hey, maybe that’s all you want out of your powdered peanut butter. 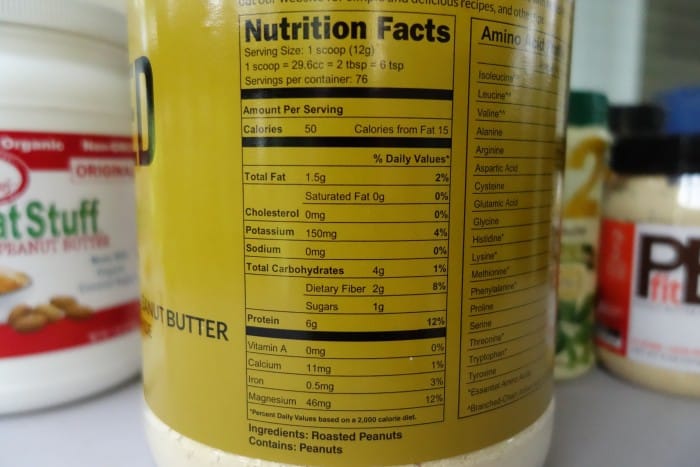 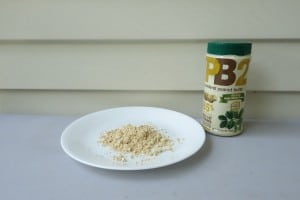 PB2 was the bronze medalist in our taste test with an average score of 3.5 out of 5.

4 out of our 5 testers described the taste as “mild” or “moderate.” It does have the lowest sodium content per serving (70mg) of the 4 non-peanuts-only brands we tested. Maybe that’s why.

On the positive side, 2 testers thought it tasted similar to actual peanut butter. “When you think PB, you think this,” wrote one.

If it’s the only brand you can find — or if you can get it for a good deal — there’s nothing wrong with choosing it. It’s good peanut butter powder.

It just wouldn’t be our first choice. 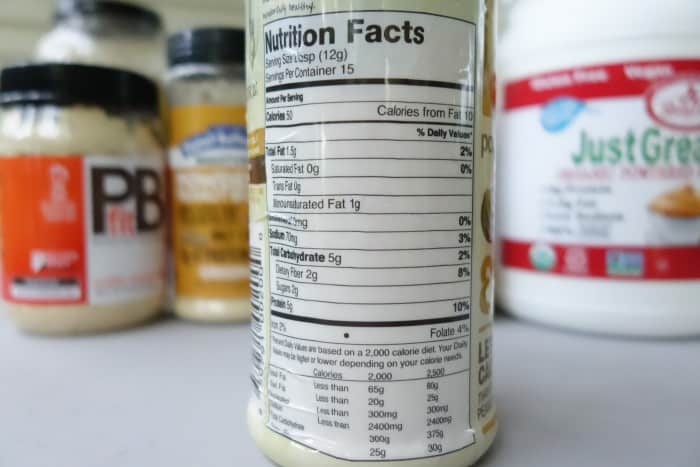 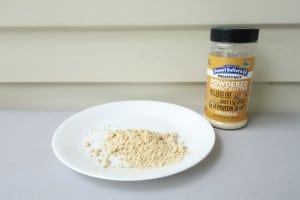 “Like [PB2] but milder,” I noted after tasting this brand myself. And I wasn’t alone.

“Similar to [PB2] but not as much peanut flavor,” wrote another tester.

Peanut Butter & Co. was our least favorite of the 4 powders containing added salt and sugar. One reason could be that, of these 4 brands, it has the least amount of sugar per serving (1g).

Testers found the taste to be on the mild side. All awarded it either a 3 or 3.5 out of 5.

Like PB2, we wouldn’t reach for Peanut Butter & Co. first, but we also wouldn’t groan if it were the only option. One tester summed it up well as “a good standby.” 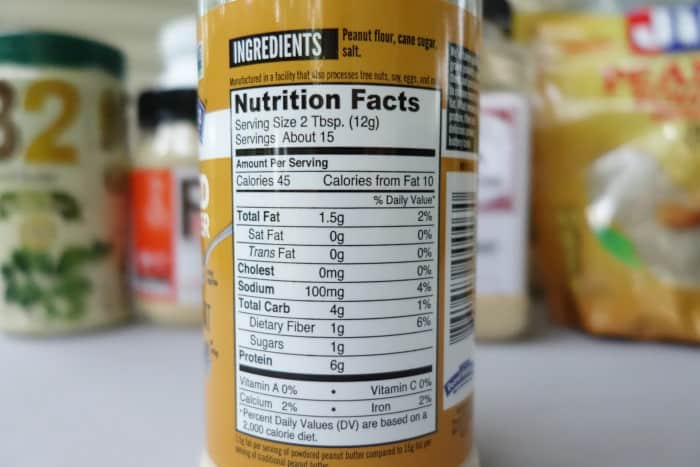 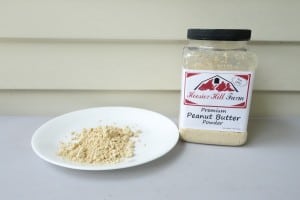 “This is like a limp handshake,” wrote one tester.

All I could think when I tasted it myself was that I was glad I didn’t have to eat a lot of it. It was too flavorless for that.

Testers consistently described this brand as “flavorless” or “tasteless.” Scores ranged from 1 to 2 out of 5.

We can’t think of any scenario where we’d recommend this brand over our award winners. 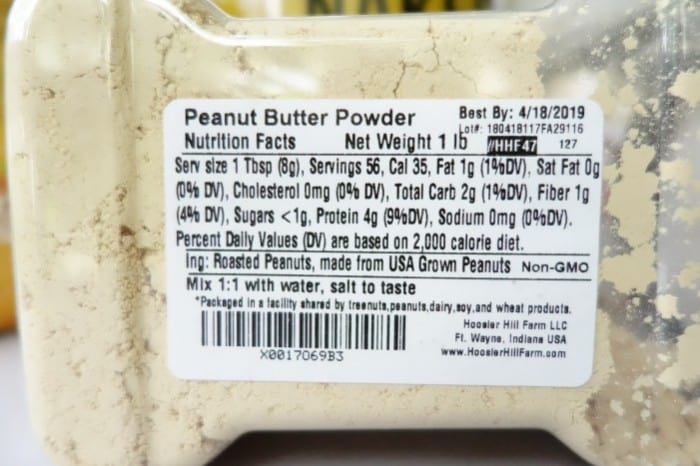 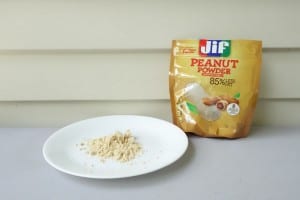 Here’s a head-scratcher for you:

Meanwhile, it was our clear loser.

It received the most 1-star scores from testers and had the lowest average score of the bunch.

When I tasted it myself, I wrote just one word in the comments section of my tasting card:

Other testers shared my sentiment.

“Strange objectionable flavor,” wrote another, “doesn’t take much like peanut butter either.”

Only one tester had anything remotely positive to say about the Jif powder. “Not necessarily bad if you acquire the taste,” he wrote. He gave it a 2 out of 5.

Needless to say, we don’t recommend this stuff.

I’m lost as to how Consumer Reports thought it was the best. After mulling it over, here are two theories: either they added sugar and salt to the mix (the back of the pouch recommends doing so) or they have more advanced palates than us.

Let’s be honest, it’s the latter, isn’t it? After all, none of our tasters said anything about any of the mixes having “a beany undertone.” Damn you universe for cursing us with the palates of peasants.

All I know is my peasant palate doesn’t want to have to taste Jif Peanut Powder ever again. 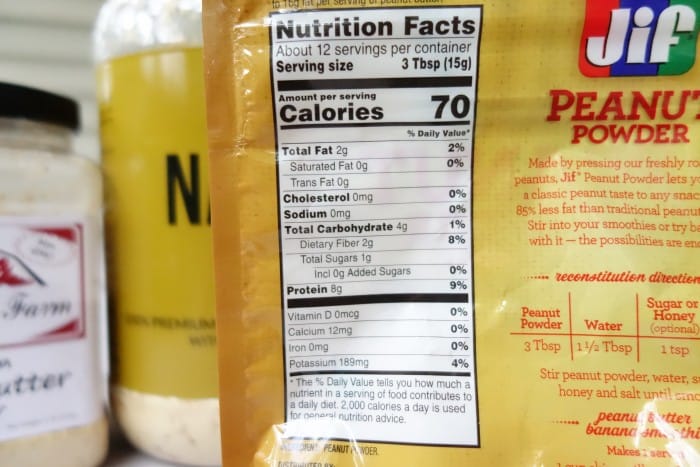 How to Choose the Right Powdered Peanut Butter for Your Needs

Peanuts Only or Not?

Four of the brands we tested have 3 ingredients:

Three of the brands we tested contain only peanuts.

The type of peanut butter powder you choose will depend on your dietary goals, your taste preferences, and what you’ll be using it for.

If you’re trying to cut down on added salt and sugar, then the choice is clear.

If you’re looking for the tastiest powder, choose a brand with added salt and sugar. Those brands scored much higher in our taste test than those containing just peanuts.

Finally, consider what you’ll be using your powdered peanut butter for. If it’s for recipes such as smoothies and pancakes, a peanuts-only brand will allow you greater control over your ratios of salt, sugar, and peanut powder.

On the other hand, if you’ll be using it like regular peanut butter (such as for trail snacks like a PB&J Taco or in combination with other backpacking foods) then we recommend a more flavorful brand, i.e. one with added salt and sugar.

Only hikers and backpackers will need to consider calories per ounce.

Here are the ratios for each brand:

Personally I also think it’s easier and less messy to take backpacking than repackaged peanut butter from the jar. If you’d rather repackage though here are some good lightweight and leakproof containers.

I recruited 4 friends and family members for a blind taste test. I also participated (in a semi-blind fashion) for a total of 5 people.

I prepared 7 bowls, one for each brand, of 2 parts powder to 1 part water and labeled them A-G so testers knew the mixes only by letter.

Once the taste test was complete, I plugged all the scores for each brand into a spreadsheet and averaged them. Those are the scores you see in the comparison table at the top of the page.

While administering these taste tests and tasting the brands myself, I kept thinking about the Pepsi Challenge.

In his book Blink, Malcolm Gladwell argues that the reason most people chose Pepsi over Coke in a blind taste test is due to a flaw in the “sip test” method.

Simply put, Pepsi is sweeter and thus preferable when you only take a single sip, but when you drink an entire bottle of soda you prefer the less sweet option — Coke in this case.

I didn’t ask tasters to eat an entire jar of peanut butter. They ate small amounts. It’s possible the same flaw is present in our own taste test.

I mention this simply to let you know we’re aware of this potential flaw. Aside from forcing testers to eat a torturous amount of reconstituted powdered peanut butter, I don’t see any easy way to overcome it.

Smartwool Socks Review: Are These Classic Hiking Socks Worth It?