GriGri vs. ATC: Which Belay Device Is Right for You?

The Sticht Plate was one. Named after its designer Fritz Sticht, the device was a precursor of the tube-style belay devices we still use today. The most popular modern tube-style device is the Black Diamond ATC (in its various forms), which will make up half our test.

In the late 1980s, Petzl assembled a team of expert climbers and started fiddling around with belay devices. The goal was to create a safer descent device than the venerable figure eight, ideally something “as trustworthy as a seatbelt.”

The GriGri, released in 1991 and named after an African good luck charm, was a revolutionary moment — a belay device with a cam that would actively lock during a fall. The GriGri is now a household name among climbers, and it’s the second half of our test.

For many climbers, the question remains: which belay device should I use? Is a GriGri worth the investment? Can I get by with a single belay device? Which one should I get first? As is often the case, the answer is…it depends.

To put these devices to the test so I could shed insight on these questions, I climbed up all kinds of single pitch and multipitch climbs, indoor and outdoor, trad and sport, long and short. Here are the conclusions.

(You can also compare the GriGri and ATC to other top belay devices in our belay device buying guide.)

Before we get started, there’s one extremely important preface to everything in this article.

NO BELAY DEVICE WILL MAKE UP FOR BAD BELAY TECHNIQUE

I repeat: there is no device on the market that will compensate for bad habits or sloppy belaying. Buying a GriGri (or any other new-fangled device) will never absolve the belayer from being knowledgeable, reliable, and attentive. No matter which device you’re using, make sure you have a thorough understanding of how to use it before you’re out in the field.

Assisted Braking: What it Gets You 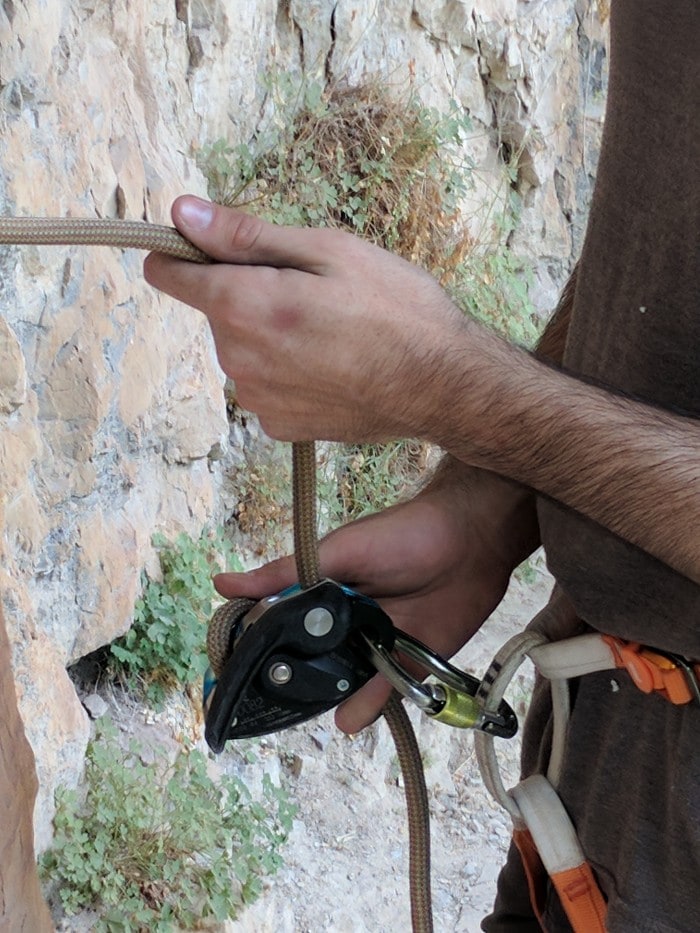 What you’re paying for when you buy a GriGri is assisted braking, that is, the ability to lock down on the rope without constant tension from the belayer. This is useful for several reasons.

The first of these is safety. Especially when climbing outside, some variables are beyond control. In rare circumstances (like rockfall) something could happen to the belayer, and a GriGri will still catch a fall.

I had a friend get a concussion after getting yanked into a roof on a belay (yes, he wears a climbing helmet now), and if he hadn’t been using a GriGri, his climber would have dropped. Because of the camming mechanism, the GriGri also helps mitigate the risk of a belayer somehow losing grip on the brake strand.

It should be mentioned that the GriGri creates other possible risks — feeding slack to a leader sometimes requires a gentle push on the camming mechanism, and if the thumb is left in place, the device will not lock. Ashima Shiraishi was once dropped this way.

2. Belayers Can Relax a Little More

Secondly, the GriGri allows belayers to relax a little more while a climber hangs. The brake strand should never go unattended, but with the cam holding the load, the belayer needn’t keep tension in the way that an ATC requires. When you’re hangdogging up and down your project because you swear your new beta will work, your belayer will thank you.

And thirdly, being able to conveniently manage descents can be useful. When rapping a fixed line or routesetting, for instance, GriGris can provide a convenient way to pause your progress while reducing risk and fatigue.

The uses for GriGris are not limited to these. Climbers use GriGris in all kinds of systems, from soloing to simulclimbing. Understanding and managing risk is paramount as usual, but the GriGri is an exceptionally versatile device. 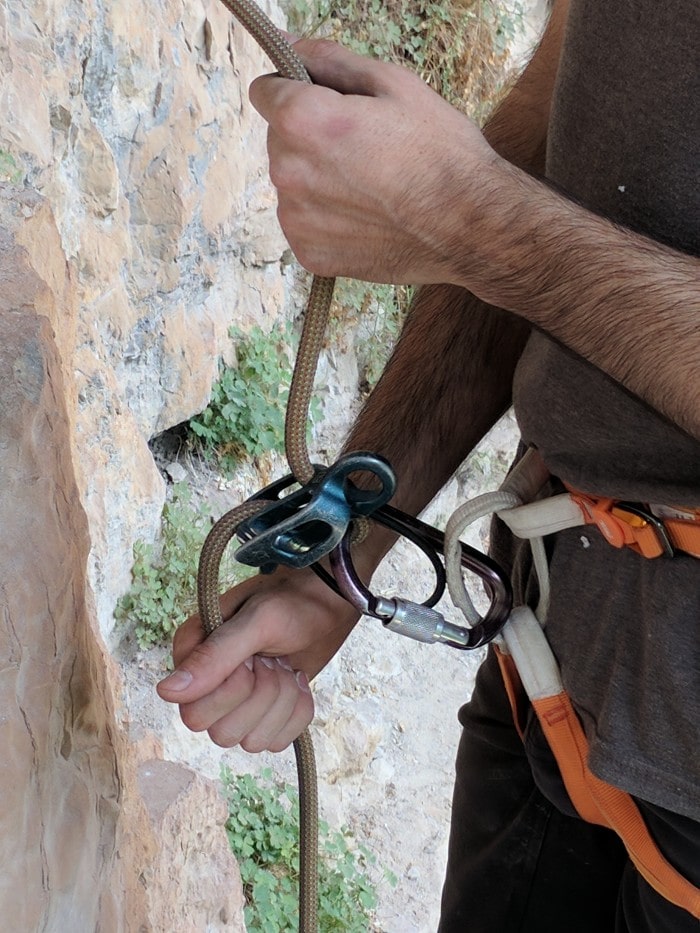 Several important factors weigh in favor of the ATC.

Competently used, there are few things the ATC cannot do. Sure, a GriGri may sometimes be more convenient, but in most cases, an ATC can do the job just fine.

What’s more, the ATC has one critical ability that the GriGri does not: double rope rappels. For all its many uses, the GriGri cannot accommodate more than one strand of rope. Given that double-rope rappels are the default method of descent in many cases, this is a considerable limitation.

And finally, ATCs retain a significant weight advantage over the GriGri. The GriGri 2 is an improvement on the original in this regard, but for alpinists and climbers who prefer a light rack, the ATC still wins out.

The ATC is like your favorite pair of jeans: it’s not always flashy, and there are occasionally better options, but it will never let you down.

Based on the above advantages and disadvantages, the best uses of each device quickly sort themselves out.

For climbers who do a lot of lead climbing or spend a lot of time outside (especially if you’re projecting, establishing routes, etc.), GriGris are often worth the investment. They’re safe, versatile, and powerful.

ATCs still have a place in almost every climber’s pack, and if you’re doing mostly gym or multipitch climbing, they’re likely all you’ll ever need. Learn to love it, use it well, and it will always be there when you need it. If you’re only buying one belay device or you’re buying your first, it’s likely that an ATC is the device for you.

GriGri vs. ATC: Which Is Best for Multipitch Climbing?

Both these devices can be used for multipitch climbing. A GriGri can generally handle a top belay just as efficiently as an ATC-Guide, and simul-rapping is an option when necessary. I know climbers who use both successfully.

In my experience, the ATC-Guide still wins out as a multipitch device based on simplicity and familiarity. Most climbers are accustomed to ATCs, and they remain the default device for longer outings. The weight savings are icing on the cake.

During these conversations, climbers occasionally bring up the idea that ATCs allow for more rope slippage and therefore give a softer catch. I was unsure if this was truth or urban legend, so I set out to give it a test.

I hooked up both devices one after the other, had a partner climb to the same point on an overhanging sport climb, and caught a fall on both. Each time, I allowed the same amount of slack in the system and marked the point where the rope exited the device with a piece of tape.

The results surprised me. The GriGri allowed only about an inch and a half of rope slippage, while the ATC allowed more than a foot. I asked my climber which catch had felt softer (I didn’t move my body for either), and he confirmed that the fall on the ATC felt slightly softer.

The softness of a catch still depends largely on the belayer, and it’s certainly possible to give soft catches with a GriGri. This test (despite being as precise as I could manage) was also limited in scope and accuracy.

Still, the results are worth bearing in mind: a GriGri will give a slightly harder catch, and may therefore require care in some situations. Given the rope slippage, an ATC will give a softer catch, but it requires an attentive and competent belay.

For the ATC, your choice is fairly straightforward. If you’re not climbing multipitch, snag an ATC-XP (the regular ATC works just fine, but the brake grooves are useful). If you’re climbing multipitch, get an ATC-Guide and don’t look back. Other brands’ versions of this device (Petzl Reverso, DMM Pivot, etc.) are usually also fine.

Petzl recently released the GriGri +, so the big new question is: do you need one? For most circumstances, the answer is probably no. (You can read our full review of the GriGri + here.)

The GriGri + adds a few nice features, like an anti-panic lock mechanism and a separate toprope setting. These features are mostly useful for guides, beginner users, or those who work with inexperienced climbers often.

If you really want the extra safety features, go for it, but for the majority of users and circumstances, the GriGri 2 is the way to go.

How to Tie Climbing Knots: 6 Knots You Need to Know

Resoling Climbing Shoes: What You Need to Know for Your First Time