Petzl GriGri + Review: Is It Better Than the GriGri 2? 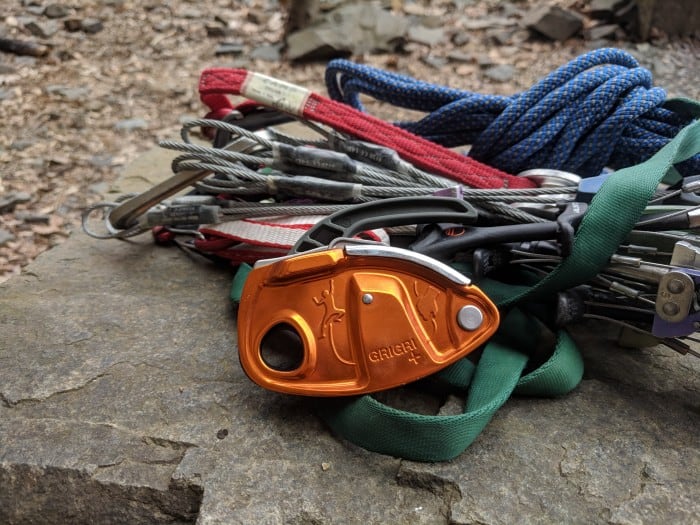 The Petzl GriGri + didn’t score especially well in our belay-device shootout, but that’s not because it’s a bad belay device. It’s an impressive piece of engineering with several unusual and useful features.

Unfortunately, nifty features don’t make the grade unless they’re paired with efficient design. This is where the Plus falters. It has all the bells and whistles, it’s just that they don’t make a belayer’s life that much easier.

In a couple cases, they even get in the way.

So while the GriGri + isn’t bad, it’s also not exceptional. For most users, it’s hard to recommend the Plus over its venerable (and cheaper) sibling, the GriGri 2.

If you’d like to read more about how the GriGri + compared to the other belay devices we tested, check out our guide to the best belay devices. Or keep reading for our full GriGri + review.

The main argument in favor of the GriGri + is its fancy new safety features. The most notable of these are a new “anti-panic” lowering feature and the addition of a dedicated belay mode for top-roping.

The anti-panic feature locks the device if the rope starts to slip too quickly while lowering. It functions exactly as promised, although it’s a little trigger-happy for my taste.

The feature counteracts a natural problem of the GriGri 2: the instinct in stressful situations is to clench rather than release, which can lead to a dropped climber. For beginning belayers, the anti-panic catch is an easy way to ensure safety.

The top-rope belay mode allows the cam to engage more easily. Petzl claims that slack is easier to take in while belaying in top-rope mode, but in practice I didn’t notice a difference. The cam is noticeably quicker to engage, which prevents unwanted slippage. Again, this is a feature mostly aimed at newer belayers. 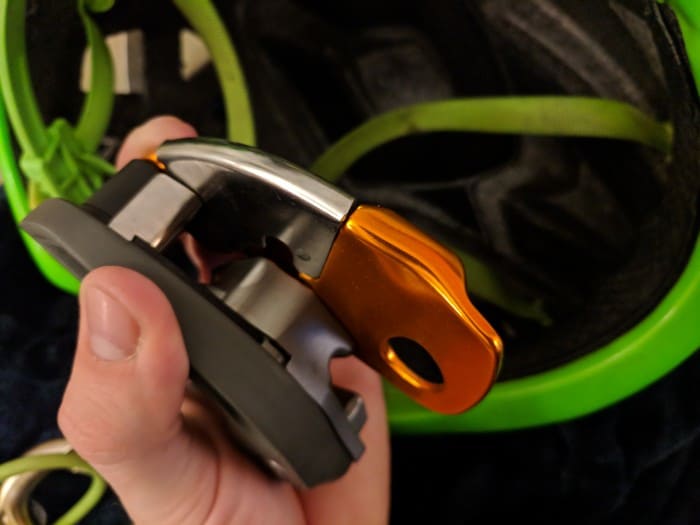 The stainless steel plate covers the area where the rope creates the most friction.

In high-wear areas, Petzl added beefy stainless-steel plates. Where the GriGri 2 would develop grooves after extended use, the GriGri + is much more resistant to wear.

The rotating face-plate is thicker and heavier, as is the camming mechanism. These changes add some weight, but they also make the Plus one of the most durable belay devices on the market.

I wouldn’t call the GriGri 2 a lightweight, and it takes a good deal of use to wear one out. But those who need a belay to device to weather intensive use and abuse (guides, for example) will appreciate the extra mileage.

(For more on the GriGri 2, you can check out our full review.)

While the GriGri 2 is rated for ropes from 8.9-11 mm, Petzl says that it functions best between the relatively narrow range of 9.4-10.3 mm.

I didn’t have any 9.0 mm ropes on hand to test side by side, but on my 9.5 mm the GriGri + was slightly easier to control while lowering. With how skinny modern sport ropes are becoming, the extra versatility is welcome.

While we’re on the subject of lowering, the new cam geometry also makes lowering easier to modulate. Some climbers criticized the GriGri 2 for being too much of an on-off switch, without much sensitivity for controlling the lower.

The GriGri + adds sensitivity and a more forgiving range on the lever, which makes controlling speed easier. Most climbers get used to the GriGri 2’s mechanism without too much trouble, but for new belayers (are you seeing a pattern here?) the Plus smooths the learning curve.

The Case of the Missing Tab

This is the one design feature we felt that Petzl botched. The GriGri 2 has a large curved tab down the length of the face-plate, which allows the device to rest on the index finger of the belayer’s right hand.

This is a convenient way to control the device while feeding slack and maintaining a hand on the brake strand. This (rather than clawing the whole device) is Petzl’s recommended method for feeding slack quickly.

The GriGri + has replaced the curved tab with a blunt nub at the near end of the face-plate. The nub isn’t curved, which means that the device can’t rest freely on the index finger — it must be held in place with the thumb.

I think this was an intentional move from Petzl, because it encourages belayers to keep their brake hand off the device when they’re not feeding slack. Theoretically, this could help avoid those high-profile accidents that happen because a belayer kept their thumb clamped over the cam.

I’m not sold. The nub makes the device feel slippery when feeding slack, and it meant that I had to look down at my hands once or twice rather than up at my climber. I feel less confident feeding quickly on this device than I do on a GriGri 2.

What’s more, if I did want to keep a hand on the device, the nub meant that my thumb had to stay pressed on the top, either on the cam or on top of the nub itself.

With a GriGri 2, I can let the device sit on my index finger without the thumb being involved, which means that I can still feed slack on short notice but there’s no chance of accidentally clamping the cam. In this way, the design of the GriGri + actually seems more dangerous.

Here’s a clip of me feeding slack with the GriGri +. You can see my thumb moving back and forth from the cam to the nub to hold the device.

That anti-panic mode is nifty, but it can make lowering a real pain. If there’s any hint of rope drag, it’s easy to engage the feature accidentally, which jerks the climber to a halt.

When my climber reaches the ground, I usually open the handle to allow them to pull a little slack and untie their knot. This also trips the anti-panic feature, leaving my climber pulling helplessly at their rope.

Once tripped, the feature can be overridden by continuing to pull back on the lever, but it was a pain to go through this process on almost every lower.

The belay modes are a similar story. The mechanism is easy enough to understand: a rotating switch on the back of the device that locks in place with a plastic toggle.

It takes more effort than expected to switch into lead mode, but it’s easy enough — as long as the lock isn’t engaged. To unlock the switch, you need something small and flat like a key. I suppose the point of a lock is to prevent accidental switching, but even so, it felt like a lot of trouble.

The GriGri 2 is far from the lightest device on the market (it’s over 100 grams heavier than devices like the Mega Jul). The Plus adds another 30 grams, which is around the weight of a wiregate carabiner.

That doesn’t sound like much, but it’s noticeable in the hand.

The other form of bloat is the obvious one: the price. All the features of the GriGri + come at a roughly 1.5x price increase which is hard to stomach.

Will it make our lives 1.5 times better in the meantime? For the right buyer maybe, but for most, probably not.

The GriGri + seems aimed almost exclusively at new climbers and guides. New climbers may be glad for the safety backups like the anti-panic mode and easy lowering. Guides can lock the devices in belay modes for clients, rely on the steel plates to extend the device’s lifetime, and rest (more) assured that no one will get dropped.

But for the majority of climbers, we recommend just buying a GriGri 2.

If your belay fundamentals are strong enough that you’re investing in an assisted-braking device, you should know enough to stay safe with a GriGri 2. And unless you’re working with new climbers on a day-to-day basis, the hassle and weight are a high price to pay for the extra safety and durability.

Seasoned users will probably want to stick to the GriGri 2 as well — the lack of tab and the anti-panic mode mean that the switch isn’t a painless one.

The GriGri + only represents a good value under certain circumstances. If you’re an extremely heavy user, the extra life in the steel plates might mean that you can go longer before replacing your device. And if you’re worried about safety, the device features could provide valuable ease of mind.

But from where we stand, the GriGri 2 does the job better and costs less. As a result, it’s hard to recommend the Plus from a value perspective.

The GriGri 2 (along with cheaper tube-style devices like the ATC-XP) still wins in that department.

How the GriGri + Performed in Our Testing 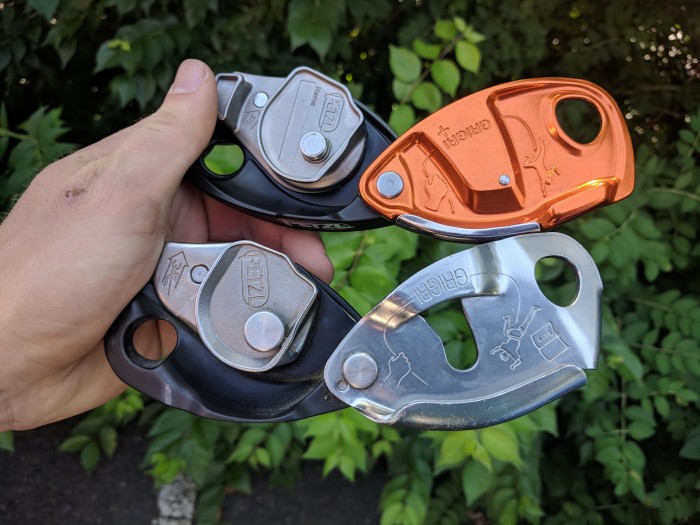 Side-by-side of the cams and face-plates of the GriGri + (top) and GriGri 2 (bottom), including the dreaded nub.

At the end of testing, we rated the devices in three categories:

This is the category in which the GriGri + excelled, with a nearly perfect score. All the devices we tested are certified and safe if used properly, but the GriGri + goes above and beyond to ensure safety. It provides easy access for new belayers, and it makes every effort to prevent malfunction or misuse.

These are worthy traits — basic safety improvements are the core of climbing technology. Even though we didn’t love all aspects of the device, the innovative features are impressive.

The GriGri + had a mediocre score in this category. It will still work everywhere a GriGri 2 works, and that includes multi-pitch climbs. But in too many cases, it’s not the device we would reach for.

On multi-pitch outings, we like a more streamlined (and lighter) device. For sport cragging, the GriGri 2 is much more convenient to use.

You could buy a Plus for use in all these venues, but I’m not sure why you would. It doesn’t perform as well in as many settings as other devices, which means that it stays in the gear closet more often.

This is another category where the Plus had a middling score. It does get a few good marks for its easily modulated lowering speed and its dedicated belay modes.

But for the most part, the features created too much hassle. The anti-panic lock was too easy to trigger and required careful operation to circumvent. The belay-mode switch is a little clumsy. And worst of all, the new nub felt like it complicated the slack-feeding process, which is a major part of lead belaying.

We welcome innovation in the world of belay devices, but the GriGri + doesn’t bring significant benefits for most climbers.

For guides and learning settings, the durability and safety backups may be worth the price. But for the majority of users, the GriGri 2 will do the job better at two-thirds the cost.

The safety features aren’t game-changers, and in some cases they made our lives more difficult. It’s a well-made and capable device, but the extra hassle makes it hard to recommend.