Rock Stars: 10 of the Most Famous Boulder Problems in the World 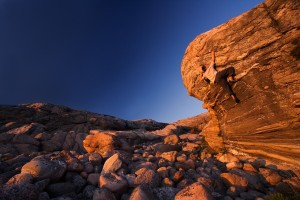 Fame can come from a variety of sources, as Kim Kardashian or Martin Shkreli will gladly tell you.

In bouldering, some problems become notorious for their aesthetics, others for their difficulty, and a few for their controversy. Some may be famous for decades to come, while others might simply be enjoying their 15 minutes.

Regardless of reason, these are 10 boulder problems likely to get a reaction of “Yeah, I know that one” from boulderers worldwide.

For the sake of variety (lest this list become a catalogue of the Grandpa Peabody boulder), I’ve capped each area at one contribution to the list. Keyboard jockeys, grab your pitchforks and let the debate begin.

Only one name could ever top this list. In 1978, John “Yabo” Yablonski pointed Ron Kauk and John Bachar toward this line up the steepest face on the centerpiece of Yosemite’s Camp 4, the Columbia Boulder.

As legend has it, the line seemed so improbable that Bachar pronounced the likelihood of success the same as that of a lightning bolt striking at midnight. After two months of work, Kauk made the historic ascent, with Bachar following suit shortly afterward (despite a broken hold). It was Bachar who inscribed the iconic chalk lightning bolt, which has since been erased and redrawn repeatedly. Lynn Hill claimed the first female ascent in 1998 and made it look easy.

Nalle’s four-year project created worldwide buzz last fall, largely because of its sheer difficulty. After only one ascent, the grade of V17 is unconfirmed, but Daniel Woods and Jimmy Webb seemed fairly impressed on their visit. Webb contributed a critical piece of beta, and Nalle unlocked the historic send during a solo session a few months later.

The problem is a return to classic bouldering power — at only five moves, it’s remarkably concise. The video documenting the project is available here and is a fun watch, depending on how many times you can stand seeing dice dramatically rolled.

Up to the lip of the stunning Grandpa Peabody, Evilution was already an impressive problem, put up by none other than Chris Sharma around the same time as The Mandala. But it was Jason Kehl who put the problem (and 21st-century highball bouldering) on the map by completing the thin moves above the lip and then fighting an insecure slab all the way through the no-fall zone.

Though a slightly easier rightward variation (Evilution Direct) has since become favored, Kehl’s original vision paved the way for Bishop to become the highball mecca it is today.

8 meters, 24 moves, a stunning arête, and a redpoint crux on the very last move — these were the ingredients for Nalle’s 2009 mega-project, codenamed “Project Real Big” before his first ascent.

“Livin’ Large is pretty much a perfect boulder problem in my eyes,” wrote Nalle, remarking that the boulder was also one of his hardest sends. Jimmy Webb later confirmed: “The overall experience trumps all.” The boulder went unrepeated for six years, and until Daniel Woods sent The Process, it made a case for the hardest highball in the world — a prize testpiece in one of the world’s best areas.

No list of notable boulders would be complete without the man himself, John Gill. Gill’s handiwork left classic problems all across the country, but despite its location in South Dakota, the Thimble remains one of the most famous.

The climb blurs the line between highball and route, but John Gill climbed it unrehearsed and unprotected on his revolutionary ascent in 1961. The climb would go unrepeated for more than 20 years.

As a commenter on Supertopo remarked: “If someone now would do a 5.17 highball without pads or spotters and no film crew…and then make no effort at promotion other than a passing comment or two to some friends, we might have an analogous event.”

This Vegas testpiece has made the news a few times. First, Paul Robinson made an impressive first ascent in 2013, one which went unrepeated for more than a year. Daniel Woods would later call the route “One of the most aesthetic and fun-to-climb lines I have done.”

Then, in 2014, an unknown climber hopped on the boulder after a rainstorm — and snapped a hold. The snafu sparked a(nother) discussion of sandstone climbing ethics, but the gods of controversy still weren’t finished. Just last winter, Ethan Pringle returned to the boulder to find one of the crux holds chipped. The climb remains a classic, but one with an unfortunately checkered past.

One of the most famous dynos in Fontainebleau and the world, this legendary problem has spawned a shocking number of send videos. From starting hold to finishing lip, the move measures over eight feet (250 or so centimeters, when you’re in France). The first ascent reportedly did not use the modern “high-foot” beta, which is all the more impressive.

Another boulder that bends the definition of “boulder,” this line is the converse of Burden of Dreams. More than 60 moves long, the climb traces a path out an immense roof via three previously-climbed problems.

Dai Koyamada spent 50 days in the Grampians with the sole purpose of sending this cave, finally succeeding in May of 2004. Ethan Pringle and Dave Graham suggested route grades of around 9a+/5.14d, but because of its proximity to the ground, pads are still all that’s necessary for an ascent.

According to John Long, this problem was “Sort of the birth of high balling out at Josh,” and it remains one of the area’s most sought-after ticks. The style of the ascent was fittingly old-school – the two climbers (who were still in high school) “climbed up and down till it felt solid, and just went for it.” Bonus points for a name that still resonates today.

“The best V2 in the world,” claims almost everyone who gets on this climb, including Nina Williams. This fierce overhang is usually named as one of the most classic climbs in an area chock-full of classics. The name allegedly came from a carpet of cacti that covered the landing (it has since been removed). For full value, local beta is to begin by bat-hanging in the starting huecos.

The Process, The Mandala, and Spectre — V16/8C+,V12/8A+, and V13/8B — Bishop, USA. Bishop’s revolutionary ascents deserve an article all their own, and these contributions from Woods, Sharma, and Graham are all deservedly renowned.

La Marie Rose — V3/6A — Fontainebleau, France. Not the hardest, tallest, or most aesthetic line in the Font, but its notorious trickery has given it a reputation. Famously denied Adam Ondra the flash.

New Base Line — V14/8B+ — Magic Wood, Switzerland. One of the hardest and most classic in the Wood, and a testament to powerful Swiss bouldering.

Jade — V14/8B+ — Rocky Mountain National Park, USA. Another Woods testpiece in the alpine hardman paradise of RMNP. The subject of an insanely impressive flash by Ondra.

Gioia — V15/8C — Varazze, Italy. After Adam Ondra nabbed the second ascent and proposed a grade of V16/8C+, Gioia was talked about as one of the world’s hardest boulder problems and the floodgates of discussion opened as to whether this problem was the world’s first ‘true’ V16.

What do you think? Can’t believe that such-and-such problem didn’t make the list or one that DID make the list? Sound off in the comments below.